Under the Oaks Half Marathon & 10K

The 9th annual Under the Oaks Half Marathon is set to take runners on an out-and-back loop tour of Jekyll Island, one of the most beautiful and historic of Georgia’s “Golden Isles,” which played a role in the creation of the U.S. federal reserve system back in the early 20th century.


Known perhaps best today for its historic Jekyll Island Club Hotel, whose moss-draped oak trees tower over the grassy lawns inside the Jekyll Island Historic District, the island played host to a meeting in 1910 of Senator Nelson Aldrich and the assistant secretary of the Treasury A. Piatt Andrew, as well as five of the nation’s leading bankers. From that came the legislation that created the banking system we know today as the Federal Reserve.

But the island is known to most people for much more than that now, as much of it is protected as a state park — by law, 65 percent of the land on the island must be set aside and left in as natural a state as possible, with plenty of parks for the people of Georgia to enjoy.

Runners will start the Under the Oaks Challenge races around the middle of the island, at Great Dunes Park on Beachview Drive.

From there, the race makes a counter-clockwise loop around the island, all the way north to DuBignon Creek and then south along Riverview Drive back down to the southern end of the island, past the Indian Mound Golf Club to Jekyll Island Road.

After they’ve made the turn, runners will then finish out their last couple of miles of the race along these loop roads before heading back to Great Dunes Park for the race finish.

Both the half marathon and 10K courses will be sanctioned by USA Track & Field, organizers note, and are designed for both beginning and expert runners — the largely flat terrain will offer a perfect course both for first-timers as well as runners looking to set personal record times. Runners looking for an extra challenge can run the 5K on Friday and either the 10K or half marathon on Saturday. 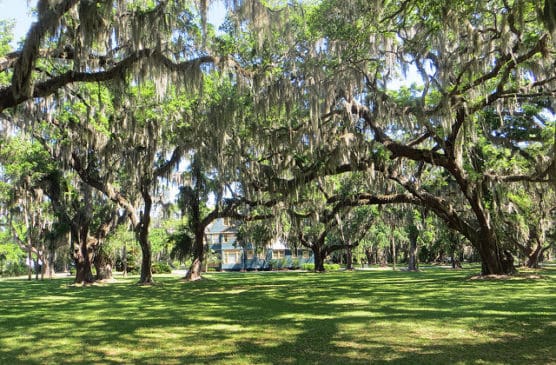 Nestled along the “Golden Isles” of the Georgia coastline, about 90 miles south of Savannah and roughly 70 miles north of Jacksonville, Fla., Jekyll Island typically sees mild to moderately warm weather in October, which has brought record temperatures here as low as 37°F (in 1957) and as high as 95°F (in 1986).

See the race route map for the Under the Oaks Half Marathon here.

To reserve your spot in the 2022 running of the Under the Oaks Half Marathon, 10K or 5K Challenge race, register online at ItsYourRace.com here.

Ever run in the Under the Oaks Half Marathon? Share your impressions here, or post your review in the Comments below.