Set for its 11th annual running this year, the Spirit of Magic Valley Half Marathon takes runners along the city streets and paved running, walking and biking trails of south-central Idaho’s Twin Falls, which is surrounded by a number of waterfalls, including the one for its namesake.

Runners will enjoy portions of the Snake River Canyon Rim trail, and all proceeds will benefit future races as they will go to the Twin Falls Community Foundation Trail Enhancement fund.

From the starting line at Shoshone Falls Park, whose stunning namesake waterfalls stand at 212 feet tall (about 45 higher than Niagara Falls), you’ll head onto the park roads that wind westward through its grounds, and then onto the trails just outside the park.

You’ll pass a piece of history in the early going — and then again a second time on the return route back — when you run past the site where the 70s and 80s-era daredevil Evel Knievel attempted to jump the Snake River Canyon on a rocket-propelled motorcycle back in September 1974.

(Spoiler alert: he didn’t make the leap successfully, but that’s no matter, as you’ll get to marvel at the fact he tried it all across the mile-wide canyon.)

After that, you’ll keep heading westward along long stretches of the 10-mile-long Snake River Canyon Rim Trails, a series of walking, hiking, biking and running trails that wind through the nearby city of Twin Falls and along the canyon rim for which they’re named, and where  you might get to see base jumpers trying to fly off in the distance.

You’ll run all the way to the half-way turnaround point at Washington Street, and then retrace your steps all the way back to Shoshone Falls Park for the race finish. 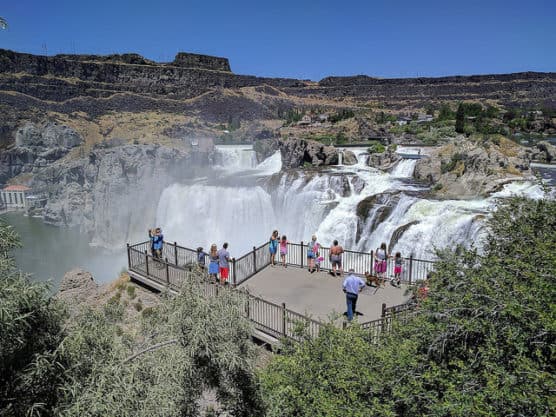 The overlook at Shoshone Falls Park, Idaho. (Photo by dvs/flickr)

Twin Falls experiences a semi-arid climate and race weather should be quite nice. Average lows for June are in the low 50s and average highs are in the low to mid 80s. Rain is always a possibility, but unlikely given that the monthly average rainfall for May in the area is just over an inch for the month.

See the race route map for the Spirit of Magic Valley Half Marathon here.

To reserve your spot in the 2023 running of Twin Falls’ Spirit of Magic Valley Half Marathon, 10K, or 5K run or walk, register online at RunSignUp.com here.

Ever run in the Spirit of Magic Valley Half Marathon? Share your impressions here, as well as anything you learned about the race that you think other runners/walkers should know.