Runners start all three races at the Half Day Preserve in the Lake County Forest Preserve, where they’ll run for roughly a mile around the parking area and trails through the preserve before meeting up with the Des Plaines River Trail.

Those running the half marathon will cover about four of the trail’s more than 30 miles, which stretch all the way from the Wisconsin-Illinois state line all the way south to Deerfield, which lies about 10 miles to the southeast of Libertyville.

The half marathoners start their race at 9:00 AM — they’re the last group to leave the starting line, as the full marathoners start at 8:00 AM and those running the 50-mile race start at 7:00 AM — and then head out through the preserve to the river trail, where they turn right and head south.

Runners follow roughly in tandem with the winding river, to the turnaround point just past the mile 2 marker. Then they turn around and head north, covering a lot of the ground they’ve just run.

The next section takes runners about four and a half miles north along the trail, winding through the Lake County Preserve and crossing over the Des Plaines River three times en route to the second turnaround point, which is also the half-way point of the half marathon.

There, runners make the turn and then head south back along the trail, covering the same four miles they just ran all the way back down to the first turnaround point they hit earlier, which now will coincide with the mile 11 marker.

Once they’ve hit the third turnaround point, runners then head north back along the trail and then make a left turn back into the Half Day Preserve where they first entered the Des Plaines River Trail. They’ll follow the paths through the woods and across the preserve back to the parking area where the race finish line lies.

Organizers note that while there will be aid stations stocked with water and refreshments on the course, it is highly recommended that runners carry along a water bottle with them during the race to ensure they stay properly hydrated.

They note also that because the race takes place inside an environmentally sensitive area, that runners be especially vigilant about taking out everything that they bring in, and not littering anywhere along the course. 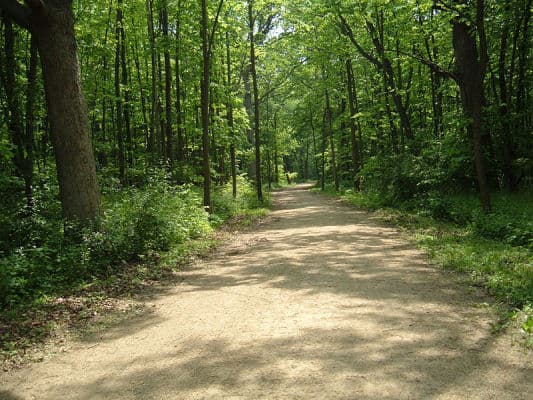 A stretch of the Des Plaines River Trail in Lake County, Illinois. (Photo by Dave Piasecki/Wikimedia)

Located about 30 miles northwest of downtown Chicago in the northeastern corner of Illinois, Lincolnshire typically sees cool to mild weather in October, which has brought record temperatures here as low as 18°F (in 1981) and as high as 90°F (in 1963).

To reserve your spot in the 2023 running of Lincolnshire’s Des Plaines River Trail Races Marathon, Half Marathon or 50-mile Ultramarathon, visit the event website below.

Ever run in the Des Plaines River Trail Half Marathon? Share your impressions here, or post your review in the Comments box below.