With a route that takes runners along the city streets and bike paths of three towns along the Fox River that flows southward from Wisconsin through northern Illinois just to the west of Chicago, the Fox Valley Marathon, Half Marathon & Fall Final 20 mile race is set to make its 12th annual running this year.

Named for the region of Illinois through which the river runs, the Fox Valley races offer a mostly flat and fast course between the towns of St. Charles, Geneva and Batavia, all of which lie roughly an hour’s drive west from nearby Chicago.

The Windy City these towns are not, however, as runners can expect to encounter a more tranquil, peaceful run along the tree-shaded streets and running, walking and bike paths that parallel the river.

The half marathon, like the full marathon and the 20-mile race, follows an out-and-back course that starts and finishes in St. Charles near the northern edge of Mt. St. Mary Park, a 29-acre park filled with paved running and walking trails, children’s playground areas and sculpture throughout, on the western side of the river.

From there, runners follow the loop course all the way south to Batavia and approaching Batavia Township, passing through local parks like Wheeler Park and the Glenwood County Forest Preserve along the way.

The first two miles or so of the half marathon take runners along city streets, taking them from the starting line along Geneva Road and River Lane before crossing the bridge at State Street and then turning runners onto the Algonquin to Aurora section of the Fox River Trail.

The course keeps runners on the trail, which is paved, for the next three miles until they reach the Batavia Museum Depot near Houston Street, where they rejoin the city streets briefly and then head back onto the path for the stretch that takes them southward to the turnaround point on the Illinois Prairie Path.

This stretch also features the biggest uphill stretch of the race, but not to worry — the few changes in elevation are very minor throughout the course, thanks largely to its location along the banks of the Fox River. Once they make the turn and begin heading north, runners head back along the path they’ve just run for roughly the next two miles before splitting off just before reaching where the trail nears Batavia’s Laurel Street.

They then head north mostly along the eastern side of the river, before crossing the bridge at Illinois Street to head over to the finish line where they started. 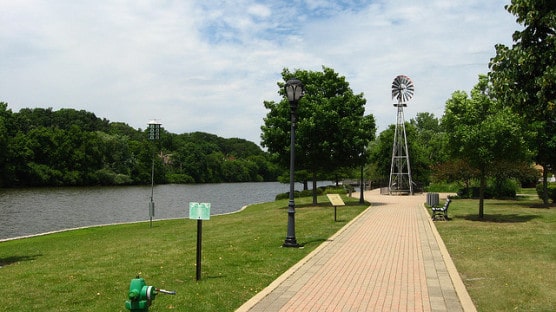 What the Riverwalk along the Fox River looks like near Batavia, Ill. (Photo by Chris Phan/flickr)

Located in northeastern Illinois, roughly 45 miles from downtown Chicago, St. Charles typically experiences mild to moderately cool and occasionally quite chilly weather conditions as summer is giving way to fall, and usually drier weather in September than in the previous summer months.

See the race route map for the Fox Valley Half Marathon here.

To reserve your spot in the early fall 2023 running of St. Charles’s Fox Valley Marathon, Half Marathon or 20-mile race, register online at MarathonGuide.com.

Ever run in the Fox Valley Half Marathon? Share your impressions here, or post your review in the Comments box below.