Filled with rolling hills and views of the mighty Mississippi River as runners are nearing the finish line, the all-new Galena Lead Rush Half Marathon makes its 7th annual running on the state’s road race calendar in November of 2017, along a route that starts and finishes near the ski slopes of the Chestnut Mountain Resort.

The terrain remains largely flat for these first few miles and then the course introduces some hills after runners make the turn right onto Baley Hollow Road and again onto Blanding Road, as runners encounter a fairly steep downhill just after passing the mile 5 marker, followed by an equally steep uphill about a mile later between the mile 6 and 7 markers, just as they’re making the turn from Baley Hollow onto Blanding Road.

Runners can expect a gradual uphill over the next few miles as they head north along Blanding through miles 7 and 8, followed by another big downhill descent after they make the turn left to get back onto Blackjack Road. Here begins a stretch in which the course loses nearly 400 feet in elevation, as runners head in the direction of the river.

The final few miles of the race, along Sand Hill and South River Roads, are nearly all flat as they unfold with gorgeous views of both the water on one side and the mountains and ski slopes on the other.

The starting time for the race is scheduled for 8:00 AM, and after runners cross the finish line at the base of the mountain next to the river, they’ll take the chairlift back up the mountain where the post-race party will be underway. 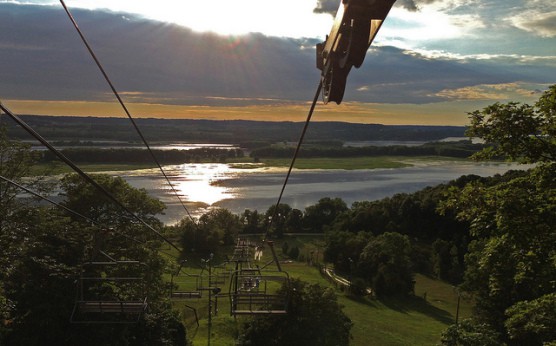 The view from a ski lift at sunset in Chestnut Mountain Resort. (Photo by Alan Light/flickr)

Nestled along the winding Mississippi River in the state’s northwestern corner, just over 160 miles west of Chicago, Galena typically sees cool to cold weather and occasional snowfall in November, which has brought record temperatures here as low as -9°F (in 1977) and as high as 77°F (in 1999).

See the race route map for the Galena Lead Rush Half Marathon here.

To reserve your spot in the mid-fall 2017 running of the Galena Lead Rush Half Marathon, register online at RaceEntry.com here.

Ever run in the Galena Lead Rush Half Marathon? Share your impressions here, or post your review in the Comments box below.