Runners get to make their way up and down the scenic parkway here in central Illinois that former president Teddy Roosevelt called “the world’s most beautiful drive” at the all-new Heights Half Marathon and Relay, which takes runners on a triple-loop out-and-back course through this small suburb of nearby Peoria.


The roadway that offers such a scenic view — and which years later inspired the call letters for the local AM radio station, WMBD — is Grandview Drive, and runners will make their way along nearly all of its 2 1/2 miles that stretch along Peoria Lake and offer views of the Illinois River, Grand View Park along the lakeshore and many historic homes looking out onto the water, many of which were added to the National Register of Historic Places back in the mid-1990s.

The individual half marathon and the 2-person relay start and finish in front of the Running Central running gear store, at the corner of Prospect Road and Marietta Avenue, which lies just a few blocks from the parks along the lakefront, including Prospect Park, Woods Park and the Forest Park Nature Preserve.

From there, the course heads first on about a mile-and-a-half-long clockwise loop around the Peoria Heights city streets — north along Prospect, east along Glen Drive, south along Miller Avenue and then west along Marietta to bring runners back across the start a second time.

Next, the course takes runners out on a longer out-and-back stretch, this time out north along Prospect to Grandview Drive, where they’ll turn right and head east and follow the road as it curves to the south in parallel with the lakeshore and the nearby river.

With thickly forested parklands on the left and huge, stately homes on the right, the course brings runners south along Grandview past the Peoria Country Club golf course all the way down to Grand View Park, where runners will finally turn off Grandview Drive when the reach the turn into the Peoria Office of Emergency Management.

Here, the course takes runners off the main road and into a side street, where they’ll run all the way to the end of the cul-de-sac and then back to Grandview, where they’ll turn left and head north, this time with the park on their right. 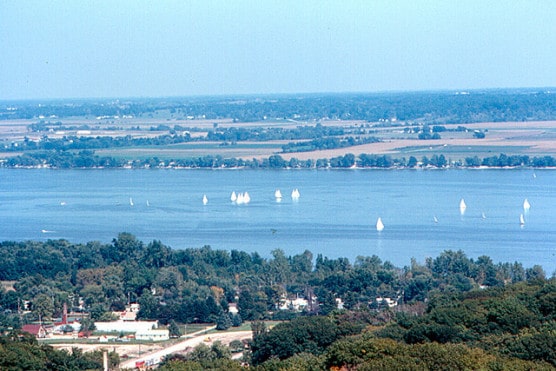 A view of the Illinois River from the Peoria Heights water tower. (Photo by Roger/flickr)

After runners repeat the loop down past the park and back north along Grandview again, they’ll turn left onto Prospect Road for the home stretch back in to the finish line at Running Central.

Event proceeds will go to benefit both the Heart of Illinois Special Recreation Association and the Children’s Hospital of Illinois.

See the race route map for the Heights Half Marathon here.

To reserve your spot in the 2015 running of Peoria Heights’s Heights Half Marathon or Relay race, visit the event website here.

Ever run in the Heights Half Marathon? Share your impressions here, or post your review in the Comments below.