Set for its 12th annual running as summer is giving way to fall in 2017 in this village that lies less than an hour’s drive from downtown Chicago, South Holland’s Heritage Haul race takes runners on an out-and-back course that starts and finishes at Veterans Memorial Park, and runs along a combination of city streets and shaded running and walking trails through four of the village’s local parks. 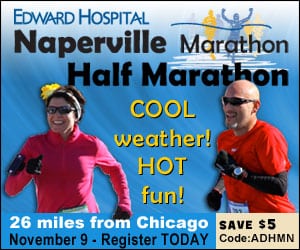 Runners start all three races in the west parking lot of Veterans Park, which lies at the intersection of South Park Avenue and East 160th Place. From there, the course heads southward and eastward into South Holland, along a course that’s mostly flat and fast, with the course’s only rolling hills coming in the stretches between about the mile 3 and mile 6 markers, along the Calumet River and the northern edges of the Cook County Forest Preserve, also known as the Wampum Lake Woods.

The course takes runners off the city streets and onto the paved walking and jogging trails at three different points out on the course: at about the mile 5 point, when runners head off Paxton Avenue and onto the walking trail that runs around the circumference of Paarlberg Park.

In the second half of the race, when runners head along the trail that winds along the edges of Pacesetter and Riverview Parks, for the stretch along the mile 10 point in the race along the river.

After making their way from Riverview Park back onto Cottage Grove Avenue, runners then head south along Cottage Grove for roughly a mile before turning right to head east on 160th Street, and then right again on Park Avenue to head north back toward Veterans Memorial Park for the finish. There’s a last stretch along the walking trails through Veterans Park before runners cross the finish line back where they started.

Just over 220 runners and walkers crossed the finish line in the 13.1-mile, 10K and 5K distances combined at the race’s 2013 running, including 70 finishers in the half marathon.

Proceeds from the race will go to benefit youth programs in the South Holland area, including its youth football, baseball and cheerleading programs as well as both the Girl Scouts and Boy Scouts programs. 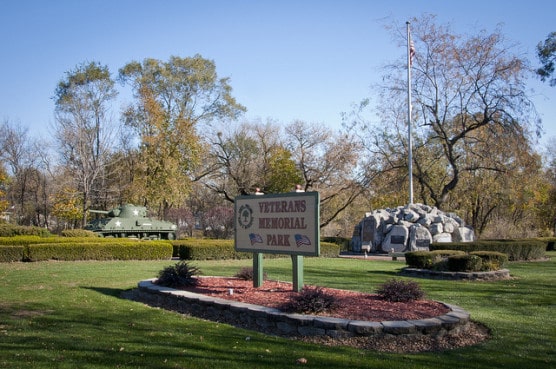 The entrance to Veterans Memorial Park in South Holland, Ill. (Photo by vxia/flickr)

Located in the northeastern corner of the state, just over 20 miles south of downtown Chicago, South Holland typically sees mild to moderately warm weather in September, which has brought record temperatures here as low as 29°F (in 1995) and as high as 99°F (in 1953).

To reserve your spot in the late summer 2017 running of South Holland’s Heritage Haul Half Marathon, 10K Run or 5K Run/Walk, register online at RaceRoster.com.

Ever run in the Heritage Haul Half Marathon? Share your impressions here, or post your review in the Comments box below.