Set for its annual springtime running, Springfield’s Lincoln Presidential Half Marathon takes runners through the city that the 16th president called home, on a loop route that combines plenty of flat stretches with more hills later in the race.

The directors of the Lincoln Presidential Half Marathon dramatically improved the race a few years ago. The race course was moved from mundane rural roads outside of Springfield, Illinois to the vibrant city streets of Abraham Lincoln’s hometown, as part of an effort to turn the race into a regional destination event in advance of the national Abraham Lincoln Bicentennial Celebration in 2009.

The scenic and challenging new course takes participants past some of the most significant Abraham Lincoln sites in the nation. The first half of the course is flat and the second half is rolling with some fairly large hills (at least for Central Illinois!).

With a start in front of the world-class Abraham Lincoln Presidential Library and Museum, runners go through historic downtown Springfield, past the Old State Capitol (home of Lincoln’s “House Divided” speech), and the Lincoln Law office. Runners continue to the only National Park Service site in Illinois, the Lincoln Home National Historic Site, and right past the only home Lincoln ever owned.

The course goes through the Illinois State Capitol campus, with a stunning view of the Illinois Capitol Building. After a stretch of several blocks on scenic brick streets, runners enter Washington Park, Springfield’s premier park which is surrounded by some of the finest homes in Springfield.

As they exit the park, runners turn onto Lincoln Avenue. Staying on this street for approximately two miles, runners are on Lincoln longer than any other street on the course.

Runners then enter the second park on the course, the over 100-year-old Lincoln Park. Exiting Lincoln Park, runners only have a mile and 1/2 past some classic, older homes to the finish line in downtown Springfield. 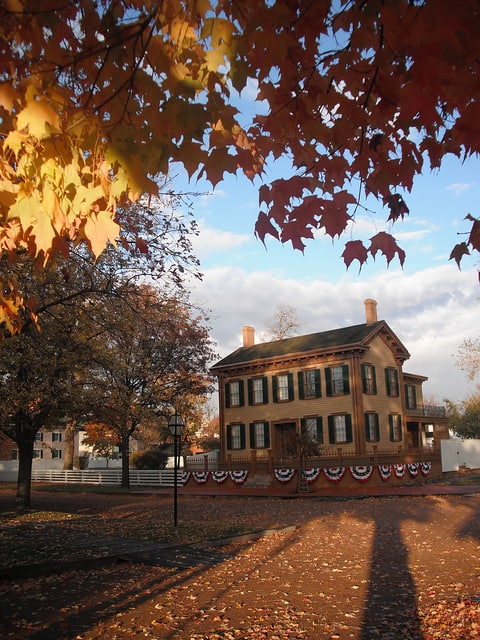 Located in central Illinois, just over 200 miles southwest of Chicago and roughly 90 miles northeast of St. Louis, Mo., Springfield typically sees cool to mild weather conditions in April, a month that has brought record temperatures here as low as 17 degrees (in 1920) and as high as 90 degrees (in 1986).

See the race route map for the Lincoln Presidential Half Marathon here.

To reserve your spot in the 2023 running of Springfield’s Lincoln Presidential Half Marathon, register online at RunSignUp.com here.

Ever run in the Lincoln Presidential Half Marathon? Share your impressions here, or post your review in the Comments below.