Part of a weekend-long series of running and walking events that run under the banner of the Fort Wayne Fort4Fitness Health Festival offers runners the chance to run a certified 13.1-mile half-marathon course in this city’s only race of this kind, and makes its 16th annual running this year.

The race course follows an out-and-back route through the streets of Fort Wayne, taking runners past picturesque neighborhoods and urban parks at the time of year when the autumn leaves are just beginning to turn.

The intersection of Baker and Harrison Streets in downtown Fort Wayne serves as the starting line for the race, and runners take off from there for the first four miles southward along Calhoun Street, all the way down to the city’s Fairview Golf Course.

Runners then make the turn on  Tillman Avenue and head west and then north along the road and turn off onto the River Greenway just before reaching the mile 5 marker.

In the second half of the race, the course takes runners northward above the river bend and into the part of the city known as the North Highland neighborhood, passing by the city’s Foster Golf Course along the way. The race then heads back into the city’s neighborhoods, along Old Mill Road, Sherwood Terrace and South Wayne Avenue.

After making their way through the turns between miles 6 and 9, runners then begin the last few miles’ stretch back toward the finish line downtown, running past the campus of Fort Wayne’s Taylor University and Lutheran Park, followed by brief stretches along Hoagland Avenue and Baker Street before heading into Parkview Field for the finish.

Because it takes place entirely on paved surfaces throughout Fort Wayne’s downtown and nearby neighborhoods, the course is mostly fast and flat, with a few gentle hills along the way.

The half marathon, 10K and four-mile race are all open to both runners and walkers, and runners can register to run in all three as part of the Triple Crown challenge. In past years, the half marathon has served as the Central Regional Championship Race for the Road Runners Club of America’s series of championship races across the country. 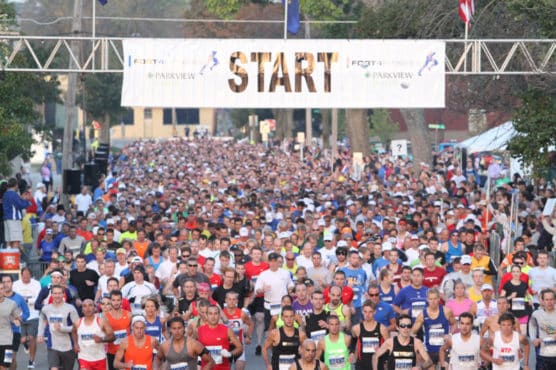 Located in the state’s northeastern corner, about 130 miles northeast of Indianapolis and roughly 160 miles southeast of Chicago, Ill., Fort Wayne typically sees mild to moderately warm weather in September, which has brought record temperatures here as low as 29°F (in 1995) and as high as 100°F (in 1953).

See the race route map for the Fort4Fitness Half Marathon here.

To reserve your spot in the the 2023 running of Fort Wayne’s Fort4Fitness Half Marathon (or any other race distance), register online at the official race website below.

Ever run in the Fort4Fitness Half Marathon? Share your impressions here, or post your review in the Comments below.