With such an official-sounding title like the University of Okoboji Homecoming Races Half Marathon, you’d probably think that this is a race that’s officially sanctioned and organized by the university up in Iowa’s Great Lakes region, the popular summertime boating, fishing and outdoor recreation destination in the state’s northwestern corner.

However, the “university” doesn’t actually exist. It’s the fictional creation of the owners of The Three Sons retail store in nearby Milford, Iowa, who first came up with the idea for their institute of higher learning back in the 1970s, recalling the fun times they’d spent with friends at the mythical “Camp Okoboji,” on the West and East Okoboji Lakes that lie just north of Milford.

Ever since then, the legend of the “university” has grown far and wide, and you’ll find everything from sweaters, t-shirts, bumper stickers and coffee mugs emblazoned with “University of Okoboji” in big block letters when you arrive in town for the race.

There’s even an entrance exam posted on the Three Sons’ website if you’d like to take a look at how to qualify for “acceptance” — and just like the mission of the university itself, the emphasis is on fun and enjoying yourself in this corner of Iowa’s great outdoors.

For runners in the half marathon, the event starts along the western side of West Okoboji Lake, in the area known as Wahpeton. From there, runners make what is roughly an upside-down U-shaped route all around the western, northern and eastern shoreline of the lake, and cross the finish line at the amusement park in Arnolds Park, which is located along the southeastern shore of West Okoboji Lake, along Smiths Bay.

Runners will hug the shoreline for most of the half marathon route, which heads along mostly shaded, tree-lined roads that lie next to lakeside houses for much of the race. Past runners note that the course contains a number of rolling hills, though no major changes in elevation thanks to its location along the lakeshore.

The biggest challenge, however — as you might have guessed from its mid-July running — is likely to be heat and humidity, as temperatures have reached the 90s on the day of the race in recent years. 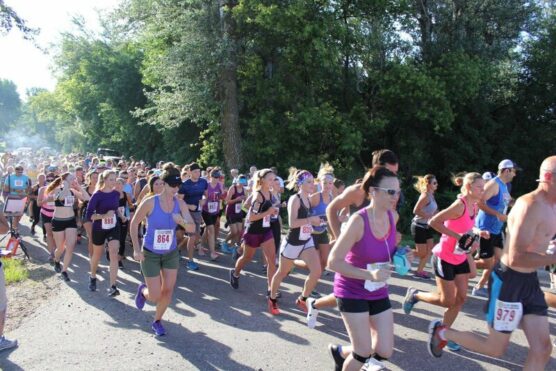 Located in Iowa’s northwest corner, just a few miles from the border with Minnesota and roughly 200 miles northwest of Des Moines, Okoboji typically sees its warmest weather of the year in July, which has brought record temperatures here as low as 41 degrees (in 1971) and as high as 103 degrees (in 1955).

See the race route map for the University of Okoboji Half Marathon here.

To reserve your spot in the 2023 running of the University of Okoboji’s Half Marathon, 10K or Triathlon race, register online at GetMeRegistered.com here.

Ever run in the University of Okoboji Half Marathon? Share your impressions here, or post your review in the Comments below.