Be ready for a run through the hills and hollows of eastern Kentucky at the Hatfield-McCoy Marathon & Half Marathons — the event begins with a shotgun start at 7:00 AM at the Food City grocery store in the eastern Kentucky town of Goody, near South Williamson.

Several hundred runners cross the finish line each year in both the full marathon and half marathon combined, and this year race organizers are offering a special treat — the chance to run either the first or last half of the full marathon.

The first half is called the Blackberry Half Marathon, and follows a point-to-point route that starts with the full marathon in Goody, near the Food City grocery.

From there, runners follow Highway 119 south through the town of Toler, after which the course takes runners through the coal camps of Goody, and through the real “Hatfield-McCoy” feud country — past the homestead of Randolph McCoy and the gravesite of many of his relatives.

After the run through Toler, the race leads participants past the foot of Blackberry Mountain, near the home site of Rev. Anderson Hatfield, where much of the origin and legends of the feud got their start.

The half and full marathon participants run the same course along Route 1056, to the Tug River, where runners will cross the bridge at Buskirk, Kentucky, into the historic village of Matewan. Here, the half marathon runners cross the finish line.

The second half marathon course is called the River Road Half Marathon, and starts in Matewan where those running the first half have just crossed the finish line. From there, runners in the River Road race will follow the Tug Fork of the Big Sandy River all the way northwest to Williamson, where they’ll cross the finish line along 2nd Avenue.

You also may run the “Double Half,” which means you’ll run the Blackberry Half Marathon, take a break for a bit, and then run the River Road Half Marathon. You’ll have 3 hours to finish the first half, and all the time you need to finish the second half. 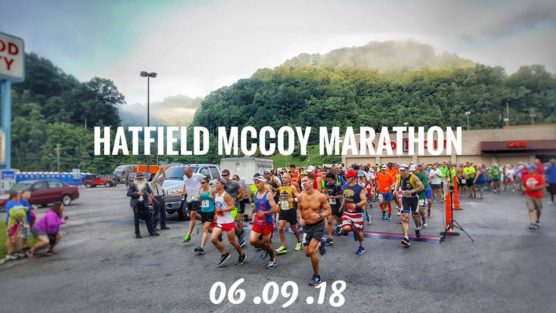 In this eastern Kentucky town near the border with West Virginia, the early days of summer are typically mild to moderately warm, and June brings some of Goody’s wettest weather of the year.

See the race route maps for both of the Hatfield McCoy Half Marathons here.

To reserve your spot in the 2023 running of Goody’s Hatfield McCoy Marathon or either Half Marathon race, register online at RunSignUp.com here.

Ever run in the Hatfield McCoy Half Marathon? Share your impressions here, or post your review in the Comments below.