Several hundred runners come out each December to run around the streets and lakefront roads of Louisiana State University at the annual running of the Baton Rouge Beach Half Marathon, a wintertime race run within this city’s college campus and through many of its most picturesque residential neighborhoods.


Run mostly along a fast and flat course that makes roughly a circle around University Lake, the race route includes some gradual inclines and declines but overall is a generally level course.

The Baton Rouge Beach Half Marathon course follows an out-and-back loop course that starts and finishes at “Baton Rouge Beach,” or the lakeshore at Stanford Park just off Stanford Avenue, on the shore of University Lake.

From there, the course follows a clockwise route through the LSU campus and the neighborhoods surrounding the lake, passing by local sights and landmarks like LSU’s Tiger Stadium and Bernie Moore Track Stadium as well as Magnolia Mound Park on the western edge of the campus.

After making their way through campus along Lakeshore Drive and Dalrymple Drive, runners cross over a bridge that takes them into Baton Rouge’s Brooks Park and the City Park Golf Course, taking them along mostly tree-lined streets that offer shade from the sun.

From there, the course winds through the neighborhoods just north of the lake, and then turns south again on Parker Street for the last third of the race, which winds along East Lakeshore Drive toward the finish line back at Stanford Park. 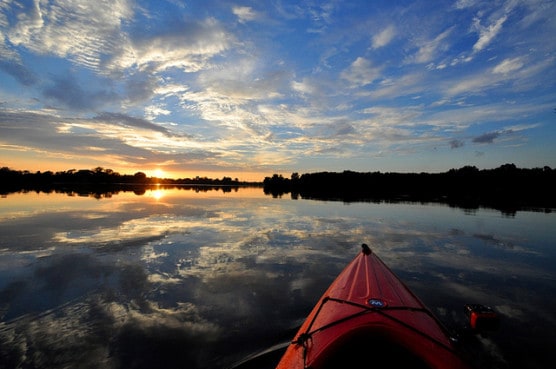 Kayaking at the LSU lakes in Baton Rouge, La. (Photo by Theodore Scott/flickr)

Nestled along the winding Mississippi River in southeastern Louisiana, about 80 miles northwest of New Orleans, Baton Rouge typically sees December temperatures that average between 42°F and 63°F, while rainfall totals average just under 5.2 inches for the month.

To reserve your spot in the 2019 running of the Baton Rouge Beach Half Marathon race, register online at RunSignUp.com here.

Ever run in the Baton Rouge Beach Half Marathon? Share your impressions here, or post your review in the Comments box below.