Known affectionately by locals and people around southeastern Louisiana as “the Red Stick,” the English translation of its French name, the historic city of Baton Rouge plays host to the 13th annual running of the Louisiana Marathon & Half Marathon in 2023, just a few years after a historic year for people across the state.

That’s because 2012 was the 200th anniversary of Louisiana’s official entry as a state into the union that we now call the United States, after being purchased as the Louisiana Territory from Napoleon back in 1803. The marathon was the first in a series of events and programs that marked 200 years of history across the state and in Baton Rouge, which can actually trace its roots all the way back to 1779, when it was founded as a British fort.

Runners will get to soak up parts of that history along the race routes for both the full marathon and the half marathon, both of which follow out-and-back courses that start and finish near the state capitol building and State Capitol Park in downtown Baton Rouge.

From there, they’ll head south and east through the city, passing by historic sites like the Old Governor’s Mansion and Old State Capitol building in the stretch from 3rd Street onto North Boulevard, as well as stretches through scenic local parks like Brooks Park and City Park Lake.

Both the half and the full marathoners will share the same course for the first 7 1/2 miles or so of the race, as they keep heading south through Brooks Community Park and along the western edge of University Lake into the campus of Louisiana State University, the home of the LSU Tigers.

On the way through campus, they’ll make a run around Tiger Stadium — often called “Deaf Valley” thanks to the decibel level the hometown LSU fans reach cheering their team on at every home game — before heading back east along Stadium Drive toward University Lake again.

Runners stay close to the lake’s shoreline as they turn off Stanford and onto East Lakeshore Drive and then May Street, and run along the strip of land that separates City Park Lake from University Lake. Next, the course rejoins Dalrymple Drive and heads north, taking runners along the route they ran earlier in the race all the way back to State Capitol Park for the race finish line. 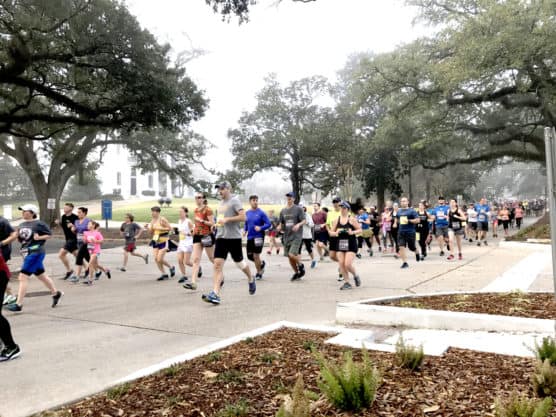 Located along the banks of the winding Mississippi River in southeastern Louisiana, about 80 miles northwest of New Orleans and roughly 270 miles east of Houston, Texas, Baton Rouge typically sees January temperatures that average between 40°F and 60°F, while precipitation amounts average just over 5.9 inches for the month.

To reserve your spot in the winter 2023 running of Baton Rouge’s Louisiana Marathon, Half Marathon, Quarter Marathon or 5K race, register online at RunSignUp.com by clicking here.