Set for its 38th annual running this year, New Orleans’ Ole Man River Half Marathon & 5K sees hundreds of runners and walkers cross the finish line each year, at a race that in recent years was run through the lush, green expanse of New Orleans City Park, home to groves of magnificent live oak trees, a golf course, statues and fountains.


Both the half marathon and the 5K race are open to runners and walkers, and both moved back to their old stomping grounds for 2016 — an out-and-back course that starts and finishes in downtown Gretna, and takes runners along the Mississippi River levee for the finishing stretch.

From there, the half marathon follows an out-and-back route that first runs southwest toward Harvey and the Gulf Intracoastal Waterway, and then runs back along the banks of the Mississippi, where you’ll finish the race running along the river levee.

Those running the half marathon will encounter a combination of paved roads and some stretches of running trails.

In recent years, the course has been redesigned to feature several miles along the shoreline of Lake Pontchartrain, between Canal Boulevard and the campus of the University of New Orleans, where runners will make a loop around the traffic circle at Elysian Fields Avenue and Lakeshore Drive.

Organizers note that the course will remain open until 12:00 PM, which means runners and walkers in the half marathon will have 4 hours to complete the race. 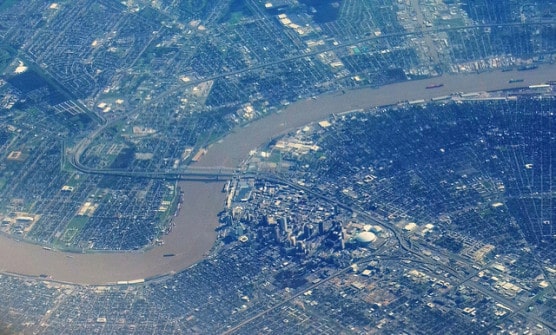 Aerial view of the Mississippi River as it runs through New Orleans, La. (Photo by Ron Riering/flickr)

Though it’s known for hot and humid weather in the summer, thanks to its location right on the Gulf of Mexico, New Orleans typically enjoys much milder weather in the late fall and early winter. In December, temperatures range between 46°F and 65°F, and runners need to be prepared for rain — the city sees an average of more than 5 inches of rainfall during the month.

See the race route map for the Ole Man River Half Marathon here.

To reserve your spot in the 2019 running of New Orleans’s Ole Man River Half Marathon or 5K race, register online at the event website here.

Ever run in the Ole Man River Half Marathon? Share your impressions here, or post your review in the Comments box below.