More than 12,000 runners and wheelchair participants trek the streets of what is probably the country’s most culturally, architecturally and musically interesting city at the Rock ‘n’ Roll New Orleans Half Marathon & 10k, which unfolds along a course through the city in the days after Mardi Gras, the annual pre-Lent party to end all parties.


Originally called the Mardi Gras Marathon and later the Rock ‘n’ Roll Mardi Gras Marathon & Half Marathon, the Rock ‘n’ Roll New Orleans race moved to a late January/early February running a couple of years back, then to a late February/early March event. The event features a point-to-point route that starts at the intersection of Poydras Street and St. Charles Avenue and finishes in New Orleans City Park.

Runners start the race in downtown New Orleans at the corner of St. Charles and Poydras and follow what is largely a fast and flat route — which you’ll discover is no surprise, thanks to the fact that much of New Orleans lies at or even below sea level — from the starting line through the city’s gorgeous Garden District, where many of the city’s true architectural jewels lie, from stately homes to churches and civic buildings.

Runners in the half marathon share the same course as those running the full marathon for nearly all of the race’s first 13 miles — those running the full marathon split off at New Orleans City Park between mile markers 12 and 13, leaving the half marathoners to head into the park and cross the finish line, while they continue around the park and head north to the shores of Lake Ponchartrain.

After the out-and-back along St. Charles — which hits its turnaround point at the northern end of Audubon Park — the course continues in a roughly northeast direction through the city, taking runners up through the French Quarter (where the famed Bourbon Street and the site of Mardi Gras revelry takes place every year) along Decatur Avenue, and then turns left onto Esplanade Avenue. Runners continue on in a northwest direction along Esplanade all the way toward New Orleans City Park, where the finish line lies.

Runners in the half marathon make a brief pass along the edge of the city’s St. Louis Cemetery, whose graves are all laid out in the cemetery in above-ground sites. The course then makes its way into City Park for the finish.

With the exception of a single overpass, participants run the course at an elevation that’s below sea level the entire race. Most of the course is fast and flat, just like the city itself, so there’s very little in the way of hills or changes in elevation throughout either the 13.1-mile or the 26.2-mile courses. 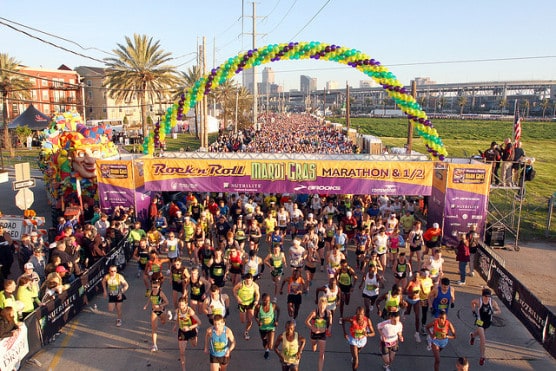 The start of the Rock ‘n’ Roll Mardi Gras Marathon in 2010. (Photo by ScubaBear68/flickr)

Nestled between the banks of Lake Pontchartrain and the Mississippi River in southeastern Louisiana, New Orleans typically sees February temperatures that average between 46°F and 65°F. Rainfall totals average just under 5.5 inches for the month of February.

To sign up for the winter 2023 running of the Rock ‘n’ Roll New Orleans Marathon, Half Marathon or Relay race, register online at the event website here.