Now named the Run Mag Mile Half Marathon and moved from August to September, this race designed especially for women makes its annual running in the Windy City on Labor Day weekend, and also includes a 5K event designed to encourage sisters as well as moms and their daughters to sign up and run together.


The claim to fame for the race is in the name — it is the first running event in the city’s history, organizers say, to include a stretch of Chicago’s famed Magnificent Mile downtown shopping district in its running route.

Runners will start and finish the out-and-back course for the race in downtown Chicago’s Grant Park, which lies along the Lake Michigan shoreline near the mouth of the Chicago River and the Navy Pier, where the city’s signature Buckingham Fountain will no doubt be the place many runners and their friends, families and spectators will gather to take photos once the race is done.

From the starting line near the Art Institute of Chicago, runners head out first onto Randolph Street and then Michigan Avenue, where they’ll cross over the Chicago River twice and then head back toward the park.

Later, the course runs past the Willis Tower, McCormick Place, the Field Museum and Soldier Field, as well as a nearly three-mile-long stretch down the “Magnificent Mile” from which the race gets its name.

Organizers say they plan to make water/hydration stations available about every 1.5 miles along the course, and that the race course will be open for 3 1/2 hours, which means you’ll need to keep a pace of 15 minutes per mile or better. 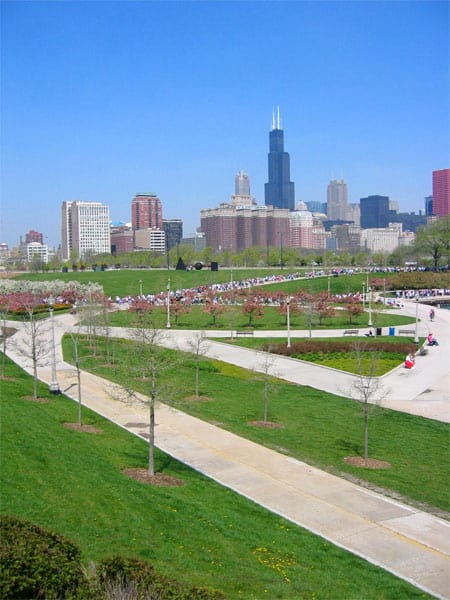 Grant Park near the Shedd Aquarium. (Photo by Rob Pongsajapan/flickr)

Located along the shores of Lake Michigan in the northeast corner of Illinois, Chicago typically sees mild to moderately warm weather in September, which has brought record temperatures here as low as 37°F (in 1974) and as high as 99°F (in 1953).

See the race route map for the Run Mag Mile Half Marathon here.

To reserve your spot in the 2016 running of the Run Mag Mile Half Marathon or 5K race, register online at the event website here.

Ever run in the Run Mag Mile Half Marathon? Share your impressions here, or post your review in the Comments box below.