With a route that takes runners past some of this harbor city’s most well-known tourist attractions, civic buildings, urban parks and cultural centers, the Baltimore Running Festival is set to mark its 22nd annual running in the fall of 2023 with a slate of race events that includes a full marathon, half marathon, 5K, marathon team relay and fun run for kids age 12 and under.

One of the D.C. and Baltimore area’s most popular road races, the Baltimore Running Festival saw more than 16,000 runners, walkers and wheelchair competitors cross the finish line in all races combined last year.

Just over 8,000 finishers ran the event’s CareFirst BlueCross BlueShield Half Marathon, on a course that starts and finishes the near the city’s now-legendary Oriole Park at Camden Yards, the home field for Major League Baseball’s Baltimore Orioles.

From the starting line for the 13.1-mile half marathon near the corner of Conway and Light Streets, runners follow what is roughly a counter-clockwise out-and-back loop course through the city, which takes them first from the waterfront along Baltimore’s Inner Harbor area through downtown neighborhoods toward Patterson Park.

The park is one of the city’s oldest public parks, and its history dates back to the Civil War, when it was used as a place to house troops, as a hospital for treating wounded soldiers, and even as a military lookout post.

Once runners make their way around the southern and eastern edges of the park, the half marathon then starts a long, steady uphill climb between mile markers 3 and 7, along a stretch that takes runners northward along Washington Street, through more downtown neighborhoods as well as past Clifton Park, all the way up to the park road that rings Lake Montebello, one of the city’s most popular routes for runners, joggers and walkers.

The park road around the lake keeps runners on mostly even terrain before sending them back out onto the slightly hillier East 33rd Street, which takes the field past Venable Park, where Memorial Stadium — once known as “the world’s largest outdoor insane asylum” — once served as the home field for both the Orioles baseball team and the NFL’s now-defunct Baltimore Colts.

After the pass by Venable Park, runners then keep heading west along 33rd toward the campus of Johns Hopkins University, and then turn south on Guilford Avenue to start the final three miles of the race, which follows a mostly downhill descent back to Camden Yards for the race finish. 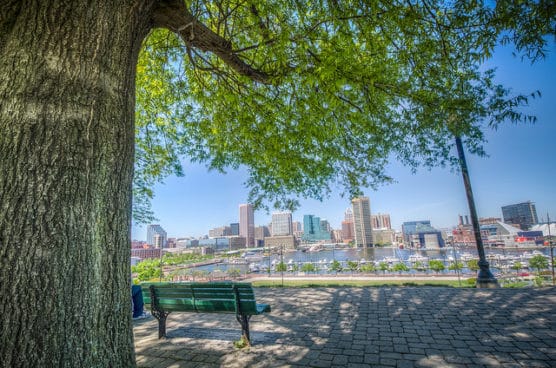 A view of Baltimore’s skyline and Inner Harbor from Federal Hill Park. (Photo by m01229/flickr)

Nestled along the Patapsco River portion of the Chesapeake Bay in central Maryland, roughly an hour’s drive northeast of Washington, D.C., Baltimore typically experiences some of its mildest temperatures of the year during the month the race is held.

See the race route map for the Baltimore Running Festival Half Marathon here.

To reserve your spot in the 2023 running of the Baltimore Running Festival Marathon, Half Marathon, 5K & Relay race, register online at RunSignUp.com here.

Ever run in the Baltimore Running Festival Half Marathon? Share your impressions here, or post your review in the Comments below.