Cold weather running gear will very likely be a must for runners at the annual wintertime running of the Cloud Snapple Half Marathon, which is set to unfold along Maryland’s C&O Canal Towpath that winds alongside the Potomac River on last day of January 2015.


Stretching no less than 184 1/2 miles, all the way from Washington to Cumberland, Md., the Chesapeake & Ohio Canal (or “C&O” for short) is a favorite of locals here in the D.C. area and northern Virginia for its plentiful opportunities for rock climbing, running, jogging and walking.

The towpath — some stretches of which are paved, while others are made of clay or crushed gravel — also is popular for cyclists, many of which make an adventure of biking its entire 184 miles.

Runners in the half marathon will start and finish their race at the Carderock Recreation Area, which lies just off the Clara Barton Parkway near Potomac.

From there, runners head out on an out-and-back route that takes them out to the mid-way turnaround point at about the 6.5-mile point of the race; after that, runners then make their way back to the finish line area along the route they’ve just covered.

The event also is a fundraiser for the High Cloud Foundation, which plans to use the proceeds from the raise to further its mission of providing assistance to orphanages, children’s foundations and rural schools in developing parts of the world.

The foundation has worked over the past several years to provide assistance to humanitarian efforts in countries like Brazil, Ecuador, Kenya, Nigeria, Macedonia and several others. 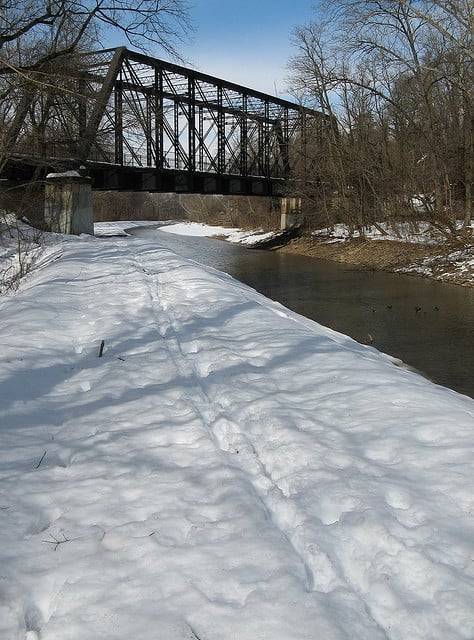 What the C&O Canal Towpath can look like in winter. (Photo by snapzdc/flickr)

Located along the winding Potomac River in southern central Maryland, just a few miles south of Potomac and about 14 miles northeast of Washington, D.C., Carderock typically experiences quite cold conditions in the mid-winter season, as January brings average monthly temperatures that range between 43°F and 25°F.

On race day (Jan. 31), the average low is 24°F and the average high is 45°F, while precipitation amounts average just over 3.4 inches for the month.

See the race route map for the Cloud Snapple Half Marathon here.

To reserve your spot in the winter 2015 running of Potomac’s Cloud Snapple Half Marathon, register online at RaceIt.com here.

Ever run in the Cloud Snapple Half Marathon? Share your impressions here, or post your review in the Comments below.