Get ready for a run through the heart of one of New England’s most picturesque towns when you run the 5th annual Amherst Half Marathon, which features a 13.1-mile race for individual runners as well as a two-person relay and 5K on Sunday.

The race unfolds through the streets of this town in Massachusetts’ Connecticut River Valley that’s home to three of the five liberal arts colleges in the famed Five College Consortium, including Amherst College, Hampshire College and the University of Massachusetts-Amherst.

In fact, you’ll start the race on the campus of the third of those, known simply as UMass Amherst. From the starting line on Massachusetts Avenue at Presidents Drive, across from Haigis Mall, runners head south along Route 116 for the first couple of miles, which take them through the center of town and past the Amherst College campus.

Next, the race keeps heading south until runners reach Shays Street, where they’ll turn left to head toward South Amherst. They’ll make two more quick turns on East Street and Station Road, and here the race begins a flat stretch that lasts for the next few miles.

Between miles 4 and 5, the race turns onto the Norwottuck Rail Trail, an 11-mile-long paved path that links the towns of Amherst, Hadley and Northampton along what was once the Boston & Maine Railroad.

They’ll stay on the rail trail for roughly 1 1/3 miles before turning right onto East Street again, beginning the second half of the race. This stretch will bring them all the way back into town and toward Cushman, and turn hilly again.

The final stretch of the race brings runners back onto the UMass Amherst campus, where they’ll cross the finish line back where they started. 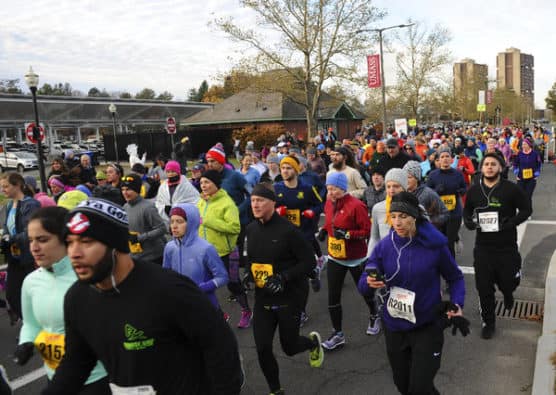 Nestled in the Connecticut River Valley of western Massachusetts, roughly 90 miles from Boston, Amherst typically sees plenty of cool, wet and sometimes snowy weather in November, as area temperatures average between the upper 20s and the upper 40s during the month, which brings just over 2 inches of snow.

See the race route map for the Amherst Half Marathon here.

3 hours, which means you’ll need to keep a pace of 13:44 minutes per mile or faster.

To reserve your spot in the 2022 running of the Amherst Half Marathon, 5K or half marathon relay, register online at the official website below.

Ever run in the Amherst Half Marathon? Share your impressions here, as well as anything you learned about the race that you think other runners/walkers should know.