Set for its 4th annual running this spring is a race that unfolds through the region known as the Pioneer Valley of Massachusetts, in a place that was once a mill town and is now home to artists, musicians and an emerging micro-brewery scene — and which you’ll run through during the race.

The Fort Hill Brewery Half Marathon starts along Fort Hill Road in front of the brewery of the same name, and from there heads out onto what could best be described as a barbell-shaped course through town.

You’ll first head north along Fort Hill Road and then turn left on Clapp Street, which you’ll run for a brief stretch before turning left again and then onto the Manhan Rail Trail, a 6-mile-long paved running, walking and biking trail that stretches from Easthampton to Southampton along the onetime Pioneer Valley Railroad.

Runners will stay on the trail for the next few miles, heading through Easthampton and past local breweries and along residential streets. The course follows a gradual, rising elevation throughout its first half, followed by an equally (very) gradual descent in the second half.

You’ll also get to take in views of Mount Tom throughout the race, the mountain that overlooks this city of roughly 16,000 that lies just a short drive from five colleges located in nearby Northampton (Smith College) and Amherst.

At the finish line there will be plenty of beer (from Fort Hill Brewery) and pizza, from the local Hillside Pizza. 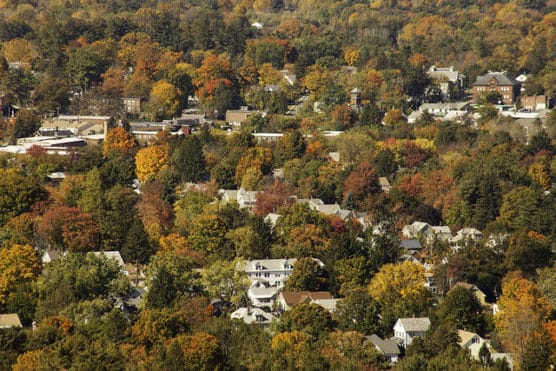 A view of Easthampton, Mass., from above. (Courtesy Massachusetts Office of Tourism/flickr)

Nestled along the Connecticut River in western Massachusetts, just north of Springfield and roughly 100 miles west of Boston, Easthampton typically sees April temperatures that average between the mid-30s and the low 60s, and snow is possible here this time of year.

See the race route map for the Fort Hill Brewery Half Marathon here.

$75 and up for the half marathon

To reserve your spot in the 2023 running of Easthampton’s Fort Hill Brewery Half Marathon or 5K race, visit the event website below.

Ever run in the Fort Hill Brewery Half Marathon? Share your impressions here, as well as anything you learned about the race that you think other runners/walkers should know.