Runners get a chance to enjoy nice, soft dirt terrain and run along one of the country’s oldest trail roads at the early summertime running of Plymouth’s Old Sandwich Road Race Half Marathon, which takes runners along the road by the same name.


For centuries, the Old Sandwich Road was originally a trail used by the Wampanoag native American tribe and later became the nation’s first true public road and a stagecoach route to ferry passengers and mail back and forth between the Massachusetts towns of Plymouth and Sandwich.

Run along a point-to-point course, the race starts along the edge of Ellisville Harbor State Park, which lies just to the south of Plymouth and overlooks the scenic Cape Cod Bay.

From there, runners follow the twists and turns of Old Sandwich Road as it winds its way northwest toward the turn at Clifford Road (which lies at about the mile 7 marker), along tree-lined and wooded trails through most of the route.

Along the race route, runners will also get to see some of the area’s most historic sites that date back to the days of the early American pilgrims and settlers, including the Old Harlow Farm House, the Old Savory Cemetery, Rye Field, Clam Pudding Pond and Sacrifice Rock, which may be one of the area’s least well-known but oldest and most historically important natural markers that dates back centuries before the arrival of English settlers.

After the turn near Clifford Road, the race course then heads southwest along Jordan Road, taking runners along the edges of both the Waverly Oaks Golf Course and the Myles Standish State Forest.

The final stretch of the race takes runners inside Forges Field Park, and then onto Long Pond Road, on the way toward the finish inside the athletic stadium at Plymouth South High School. 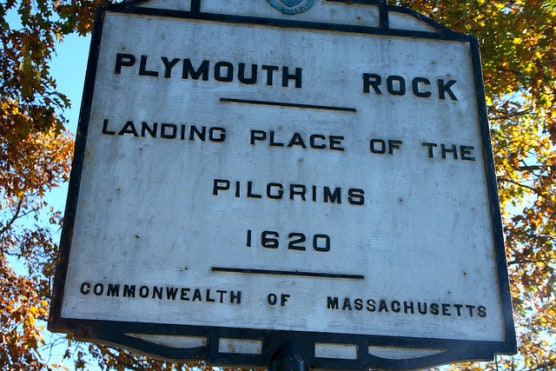 Located about 40 miles southeast of Boston, overlooking the waters of Cape Cod Bay in eastern Massachusetts, Plymouth typically sees some of its mildest and driest weather of the year in June, which has brought record temperatures here as low as 35ºF (in 1971) and as high as 102ºF (in 1952).

To reserve your spot in the 2017 running of Plymouth’s Old Sandwich Road Race Half Marathon, 5K or 7.5-mile race, register online at RunSignUp.com here.

Ever run in the Old Sandwich Road Race? Share your impressions here, or post your review in the Comments below.