Scenic views of the waters of the Parker River flowing by, as well as the salt marshes, farmlands and fieldstone walls this region is known for, will be your constant companion as you make your way along the route at the Parker River Half Marathon, part of a series of races in small towns across New England throughout the spring, summer and fall.


The Parker River race makes its third annual running this year, along an out-and-back course that starts and finishes in front of Triton Regional High School, on Elm Street near Great Meadow Farm, now set aside as conservation land and situated along the marshes that surround the river.

From there, runners will make their way north along a route that’s filled with rolling hills but no major changes in elevation. The race heads through the village of Byfield along Central, Church and Moody Streets, and then all the way north to the first turnaround loop, along Moulton and Cherry Hill Streets.

Once runners make the turn, the race heads back south again through Byfield, a small village that’s part of the nearby town of Newbury, which is home to just over 6,600 residents. The race then crosses over Interstate 95 on Central Street until you get to Orchard Street, where the course takes a left turn and begins a big loop around Great Meadow.

This stretch features some of the most picturesque views on the race course, as you’ll run past unspoiled wildlife management areas and farms, and cross over the river twice before heading back to Triton High School for the race finish.

The course for the race will be open to traffic, organizers note, and the course will be supported with aid stations and EMT/ambulance crews for 3 hours. 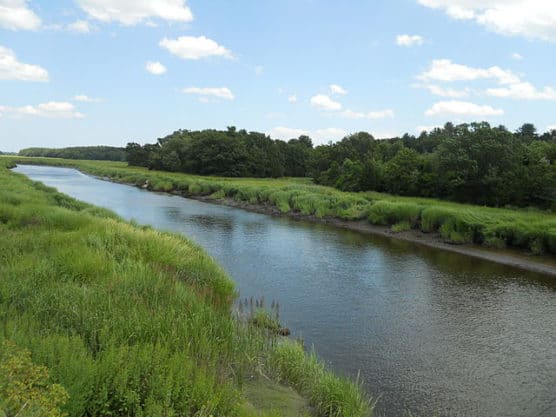 The Parker River and Newbury marsh as seen from Newbury, Mass. (Photo by Botteville/Wikimedia)

Located along the Parker River near the northeast corner of the state, just over a 40-minute drive from Boston, Byfield typically sees cool (and sometimes cold) weather in October, which typically brings temperatures between the high 30s and the high 50s, and rainfall amounts just over 2 inches for the month.

See the race route map for the Parker River Half Marathon here.

To reserve your spot in the 2019 running of Byfield’s Parker River Half Marathon race, register online at RunSignUp.com here.

Ever run in the Parker River Half Marathon? Share your impressions here, as well as anything you learned about the race that you think other runners/walkers should know.