Race to the Summit Half Marathon & 5K

Get ready for a challenging hill climb up to the summit of Mount Wachusett at this early autumn race, which winds its way through a scenic state forest that’s also a popular ski area in the winter and lies just over an hour’s drive west from nearby Boston.


The race begins near the base of the Wachusett Mountain ski area, just off Bolton Road and Park Road. From there — starting at an elevation of just over 970 feet above sea level — runners will head north along Park Road to Worcester Road, where they’ll turn left and begin a big, eight-mile-long clockwise loop.

That loop will continue north toward the town of Westminster, continuing on along Narrows Road, Notown Road and Rocky Pond Road before bringing runners back to Park Road, and then heading south into the Wachusett Mountain State Reservation, a 3,000-acre forest that surrounds the mountain, which tops out at just over 2,000 feet.

That’s the climb runners will make in the final few miles of the race as they begin their ascent between miles 10 and 11, and not stopping their climb until they make it all the way to the finish line at the top of the mountain.

After they cross the finish line, runners will take the chair lift down to the base of the mountain, where a barbecue festival will be waiting along with the post-race party.

Organizers note that proceeds from the race go to support the Marlene A. Mills Foundation, a locally-based nonprofit that encourages community service and volunteerism. Before her death in 1992 from cancer at age 37, Mills was a tireless advocate of community safety, and organizers hope to celebrate and continue her legacy with the race. 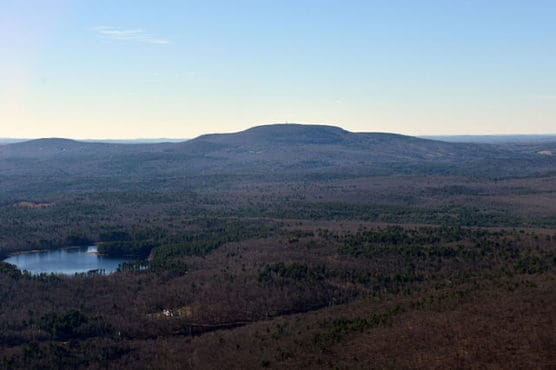 View of Mount Wachusett in the distance. (Photo by Wikimedia)

Located among the mountains of Worcester County, roughly 55 miles west of Boston, the Wachusett Mountain area has weather much like nearby Princeton, which typically sees temperatures from the low 50s to the high 60s in September, and steady precipitation throughout the year.

See the race route map for the Race to the Summit Half Marathon here.

To reserve your spot in the 2019 running of Princeton’s Race to the Summit Half Marathon or 5K race, register online at RaceWire.com here.

Ever run in the Race to the Summit Half Marathon? Share your impressions here, as well as anything you learned about the race that you think other runners/walkers should know.