A mecca for fishermen, artists, tourists and families for some four centuries, this small city nestled on the North Shore of Massachusetts is home to both the nation’s oldest seaport and its oldest working artistic community, and plays host to this half marathon each year just as the weather is warming up in early June.

The spirit of Gloucester, home to just shy of 29,000 residents, is captured perfectly in the iconic Fisherman’s Memorial Statue shown in the photo below, built in 1925 and also known as the “Man at the Wheel,” which honors the memory of the thousands of fishermen who lost their lives at sea in the waters around Gloucester over the centuries.

Runners will make their way past the famous statue early in the race (and again late in the race, as they’re heading back in to the finish), after starting the half marathon at Gloucester High School, just off Leslie O. Johnson Road.

From there, the course heads east through the city along the coastline, and sticks to the water for most of the route — there are really only a handful of stretches on the course that don’t take you past the waters of the Western or Inner Harbors.

Once you make it to the mile 2 marker at the South Channel, you’ll head along the coastline of Cape Ann, along East Main Street and Eastern Point Boulevard.

You’ll pass the historic Ocean House Hotel at Bass Rocks, where you’ll be able to look out onto the rocky coastline and take in the stunning view before making your way up to Good Harbor Beach, where you’ll make the turnaround.

After that, the course is largely retracing your steps all the way back to the finish line at Gloucester High School. If you’re up for it, you can run the Twin Lobster Challenge — run both the 1-mile race and the half marathon! 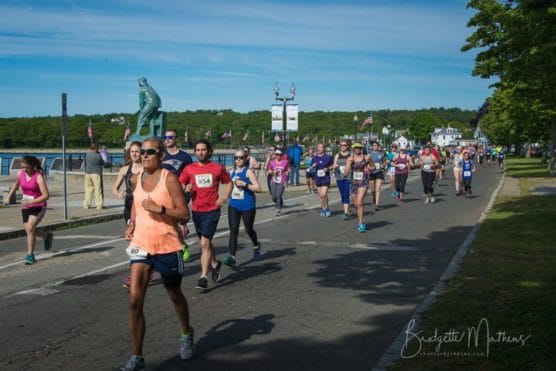 Runners make their way past the Fisherman’s Memorial Statue in Gloucester, Mass., at the Twin Lobster Half Marathon. (Photo couresty YuKanRun)

Nestled along the shoreline of Cape Ann on the North Shore of Massachusetts, about an hour’s drive northeast of Boston, Gloucester typically sees a warm month in June, when temperatures between the high 50s and the mid-70s, and a dry month with just under 3 inches of rainfall.

See the race route map for the Twin Lobster Half Marathon here.

To reserve your spot in the 2023 running of Gloucester’s Twin Lobster Half Marathon, 1-Mile Race or Twin Lobster Challenge, register online at RunSignUp.com here.

Ever run in the Twin Lobster Half Marathon? Share your impressions here, as well as anything you learned about the race that you think other runners/walkers should know.