More than 860 runners crossed the finish line in all races combined at last year’s inaugural running of the Worcester Running Festival Half Marathon & 5K, which follows a route that starts and finishes at the Worcester City Common, a 5-acre park downtown that faces City Hall and was built all the way back in 1669.


Organizing the race is the famed British runner Geoff Smith, whom locals especially will likely remember as the winner of back-to-back Boston Marathons in 1984 and 1985. The Worcester race is the second in a three-race series that also includes April’s Blackstone Valley Half Marathon and July’s Narragansett Bay Half Marathon.

For runners, the race (as mentioned above) will follow an out-and-back route that starts downtown on Front Street, between Worcester City Common on one side and City Hall on the other. From there, the course heads west through the city, first through commercial districts and later into residential neighborhoods, along a very gradual ascent for the first couple of miles.

Starting around mile 3, the next few miles include the race’s hilliest stretches, as runners head past Newton Hill and Salisbury parks as well as the American Antiquarian Society building, a library that dates back to 1812 and holds one of the biggest collections in the world of early American historical documents.

After heading through Newton Square, the course next makes a long straightaway along June Street toward the campus of Worcester State University and the God’s Acre Conservation Area, filled with hiking trails, forests and wetlands that’s also home to the Deed Rock, the stone inscribed by Solomon Parsons when he deeded 10 acres here to the worship of God back in the mid-19th century.

When runners hit Mill Street, they’ll follow a T-shaped pair of out-and-back stretches along the street before turning back onto June Street for the final three miles of the race.

The course then runs back through the Beaver Brook, Main Middle and Piedmont neighborhoods before heading back to the Worcester Common for the race finish. Runners in the half marathon will have a course time limit of 3 1/2 hours. 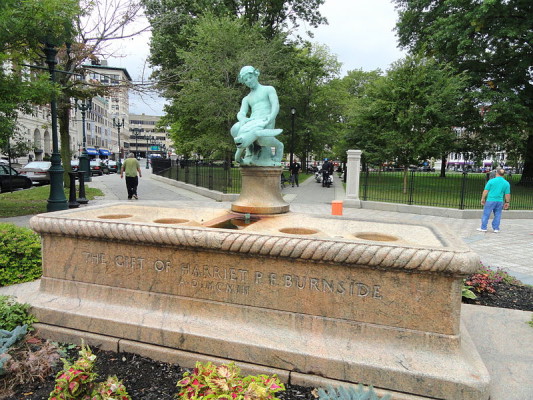 The Burnside Fountain in Worcester Common, where the race starts in Worcester, Massachusetts. (Photo by Wikimedia)

Located in central Massachusetts, about 45 miles west of Boston, Worcester typically sees cool weather in October, which has brought record temperatures here as low as 19ºF (in 1940) and as high as 91ºF (in 1898).

See the race route map for the Worcester Running Festival Half Marathon here.

To reserve your spot in the fall 2017 running of the Worcester Running Festival Half Marathon or 5K race, register online at RaceWire.com here.

Ever run in the Worcester Half Marathon? Share your impressions here, or post your review in the Comments below.