Note: The 2020 race is a virtual event and open to new registrants. Details are included below.

Rolling dunes along the beaches here on the Lake Michigan shoreline, as well as the quaint, charming downtown areas are the hallmark of these coastal towns where a few hundred runners take to the streets for the Michigan Art Coast Festival, which has hosted a Town Crier 10K & 5K for years and hosts its first half marathon this summer.


The race unfolds between the two small towns Saugatuck and Douglas, which have garnered raves from publications like Conde Nast Traveler magazine (on its “Top 25 Beaches in the World” list) and USA Today, which named Saugatuck the nation’s “Best Small Coastal Town” a few years back.

Because they escaped both the fires that destroyed many surrounding towns in the Midwest in the late 1800s as well as connections to larger nearby cities by the railroads, Saugatuck and Douglas have maintained their charm as well as their Greek revival and Italian architecture that was prevalent before and just after the Civil War.

That’s what runners will get to soak up when they visit the area for the half marathon, which starts along Elizabeth Street, next to the campus of Saugatuck High School. After a few turns through town, the race heads out onto Holland Street, which heads south through town and runs for a brief stretch along the Kalamazoo River.

After that, the race heads over the bridge that crosses Kalamazoo Lake and over toward the beaches along the lakeshore. You’ll run along Lakeshore Drive overlooking Douglas Beach Park for a three-mile-long out-and-back stretch, and then head east on 130th Avenue back into Douglas, where you’ll cross the finish line at Center and Main Streets.

Proceeds from the race go to benefit Saugatuck High School’s track and cross country teams. You’ll have two weeks (June 20 – July 4) to run your virtual race, and until July 11 to submit your results for the virtual race. 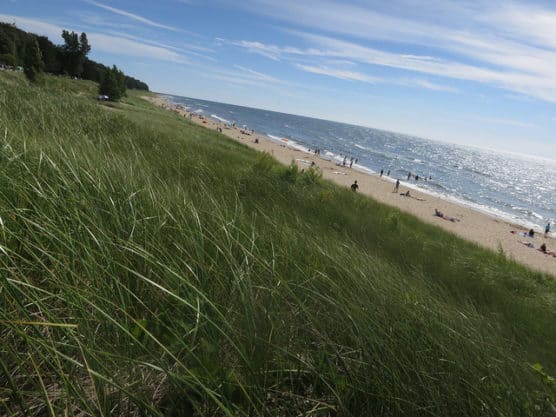 Nestled along the eastern shore of Lake Michigan, about 38 miles southwest of Grand Rapids and roughly a 140-mile drive from Chicago, Saugatuck typically sees mild to quite warm weather in June, as temperatures average from the mid-50s to the high 70s.

See the race route map for the Town Crier Half Marathon here.

To reserve your spot in the 2020 virtual running of the Town Crier Half Marathon or Town Crier 10K or 5K race, register online at RunSignUp.com here.

Ever run in the Town Crier Half Marathon? Share your impressions here, as well as anything you learned about the race that you think other runners/walkers should know.