Measuring 13 miles by three miles at its narrowest point and six miles at its widest, Michigan’s peaceful and serene Beaver Island welcomes runners for the 10th annual Beaver Island Half Marathon, which also features a 10K and 5K run.


Set out in the middle of Lake Michigan, between the state’s Upper and Lower Peninsulas, Beaver Island is known for its beaches, sand dunes and scenic harbors, as well as for a rich history that dates back to the mid-1800s.

Once called “the Mormon kingdom of Beaver Island,” the area was populated by James J. Strang — one of the first adherents and leaders of the Mormon church, along with Joseph Smith — and his followers, who set up a “monarchy” on the island.

Following a series of conflicts between Strang and his followers with the island’s other residents, the “kingdom” eventually waned in influence and the island came to be populated by many Irish immigrants and fishermen, who helped give the island the name it is known by even today, “America’s Emerald Isle.”

Today, landmarks of the community’s history can be seen around the island, which is home to a few hundred permanent residents and sees many, many more tourists and vacationers to enjoy its beaches as well as those of the 13 other nearby islands that make up the Beaver Island Archipelago, four of which also make up the Michigan Islands National Wildlife Refuge.

For runners and walkers taking part in the half marathon, the race follows an out-and-back course around the northern end of Beaver Island, and features views along the route of the gorgeous blue waters of Donegal Bay and Font Lake.

The race starts and finishes along Beaver Island’s public beach area just off Back Highway, and the course features a range of surfaces including paved roads through town and dirt and gravel pathways along the sections of the course near the beach areas. And, at the finish line, runners can cool off with a splash in the cool waters of Lake Michigan. 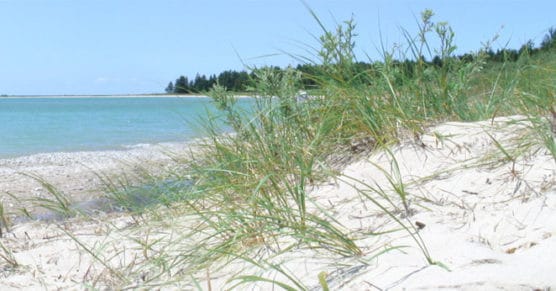 Located out in the waters of Lake Michigan between Michigan’s Upper and Lower Peninsulas, just over 30 miles northwest of the city of Charlevoix on the mainland, Beaver Island typically experiences cool to moderately warm weather in the late summer season, as well as its heaviest rainfall on average during the month the race is held.

In August, the island’s average monthly temperatures range between 58°F and 75°F — on Aug. 31, the average high is 72°F and the average low is 50°F — while rainfall totals average just over 3.5 inches for the month.

See the race route map for the Beaver Island Half Marathon here.

To reserve your spot in the 2019 running of Michigan’s Beaver Island Half Marathon, 10K or 5K, register online at RunSignUp.com here.

Ever run in the Beaver Island Half Marathon? Share your impressions here, as well as anything you learned about the race that you think other runners/walkers should know.