Runners who get a kick out of running over bridges will get to more of that at this race than perhaps any other of its kind, as Frankenmuth’s Brückeläufe — the name is German for “Bridge Race” — offers a half marathon that features 13 bridges throughout its 13.1 miles, a couple of which are covered bridges and others that date back to the turn of the previous century.


Settled in the mid-1840s by Lutheran immigrants from what was then known as the Franconia region of Germany — today known as Bavaria — Frankenmuth has made the most of its European heritage and bills itself as Michigan’s “Little Bavaria,” drawing more than 3 million tourists each year to its Bavarian-themed shops, restuarants, festivals and Bronner’s Christmas Wonderland, which calls itself the “world’s largest Christmas store.”

This year marks the 3rd annual running of the Brückeläufe Half Marathon and 5K, which is organized by the Frankenmuth Jaycee Chapter, the same chapter that also puts on the city’s annual 5K, 10K and 20K on the 4th of July and the 8K race each February. For the October Bridge Race, the half marathon is set to follow a USATF (USA Track & Field) certified route.

For the race itself, the course will follow an out-and-back route that starts and finishes in Heritage Park, which lies along a bend in the Cass River the flows through the city. From there, the course heads south and west, crossing the river right after runners pass the first mile marker, for the first of two quick bridge crossings over the river.

While there are some rolling hills out on the course, most of the race is fast and flat and run on paved surfaces, and runners can expect mostly gradual uphill and downhill stretches.

They can also expect to cross several of the area’s most historic bridges, organizers note, including a pair of turn-of-the-century bridges (meaning the previous century) — the Black Bridge, an iron trestle bridge built in 1907, as well as the 1904-era Gugel Bridge, a historic metal truss bridge that spans the Cass River over Beyer Road, which runners pass over around the mile 4 point of the race. 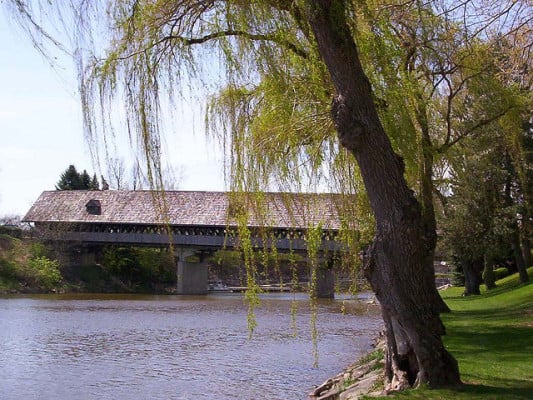 Perhaps the crown jewel of the bridges runners will pass over during the race is the Holz Brucke, also known as Zehnder’s Wooden Bridge (“Holz Brucke” is German for “wooden bridge), which is named for local resident William “Tiny” Zehnder Jr., the man who is credited for developing Frakenmuth into the German-themed tourist destination it has become today.

The 239-ft.-long bridge was rebuilt in 1979 but retains the traditional timber look of the covered bridges of this kind back in the Black Forest of Germany.

Nestled along the winding Cass River in Michigan’s Lower Peninsula, about 16 miles southeast of Saginaw and roughly 95 miles northwest of Detroit, Frankenmuth typically sees cool to mild (and occasionally warm) weather in October, which has brought record temperatures here as low as 20°F (in 1960) and as high as 88°F (in 1971).

$50 for the half marathon

To reserve your spot in the early fall 2019 running of Frankenmuth’s Brückeläufe Bridge Race Half Marathon or 5K, register online at RunSignUp.com here.

Ever run in the Brückeläufe Half Marathon? Share your impressions here, or post your review in the Comments box below.