The hills, trees and backwoods riverbanks of Michigan’s Huron River Drive are the setting for the annual Dexter to Ann Arbor Run, a road race event with a half marathon, a 10K, a 5K and a kids fun run that takes runners on a course exactly as its name suggests, from the town of Dexter along an eastward route along the Huron River to the finish in downtown Ann Arbor.

Hilly and fairly challenging, the race is run on paved surfaces throughout the entire course, and features its only real flat stretches of any length for two miles during the entire race. The race draws thousands of runners every year, including just over 2,500 finishers in the half marathon last year.

First run in 1974 as a way to commemorate Ann Arbor’s sesquicentennial (150th) anniversary that year, the race was originally run as a 15-mile race that took runners on an out-and-back course along Dexter-Chelsea Road.

Though it has gone through many changes over the years — the addition (and later subtraction) of a half-marathon relay, as well as the 10K and 5K races that are run at the event today — the race got its current slate of events in the late 1990s and early 2000s, when it was scheduled to coincide with Ann Arbor’s popular “Taste of Ann Arbor” food festival.

The race starting line for the half-marathon lies at Dexter’s Creekside Intermediate School on Baker Road, and runners start the race at 8:30 AM. From there, the course follows a counter-clockwise loop through Dexter as they make their way to Huron River Drive, which they follow as its winds along the shores of the river for most of the race.

The course runs through a series of parks on its way to Ann Arbor, including Dexter Huron Metropark, Delhi Metropark and Bird Hills Park. The Huron River makes for a mostly quiet companion throughout the race, as this slow-moving river is known perhaps best to locals and visitors for its slow current and scarce rapids that make for great canoeing and kayaking.

Once they reach downtown Ann Arbor, runners then begin the final stretch of the race along North Main Street, which is also one of the hilliest parts of the race and actually ends on an uphill to the finish line. The half marathon is for runners only, and organizers note you’ll need to keep a pace of 15 minutes per mile or better. 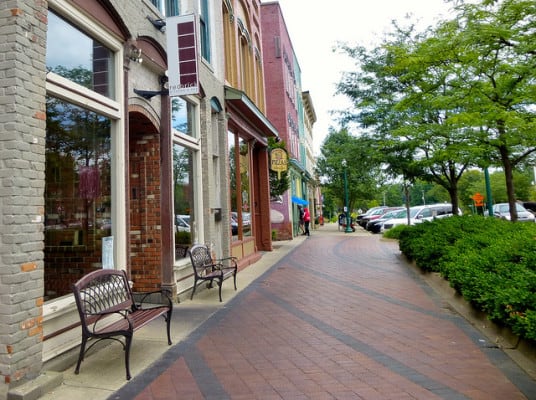 Set in the southern part of the state, just 40 miles from Lake Erie and nearby Detroit, the city of Ann Arbor enjoys pleasantly mild to moderately warm temperatures in the summer, with occasional rainfall.

See the race route map for the Dexter-Ann Arbor Run Half Marathon here.

To reserve your spot in the 2023 running of the Dexter-Ann Arbor Run Half Marathon, 10K or 5K race, register online at RunSignUp.com here.

Ever run in the Dexter-Ann Arbor Run? Share your impressions here, or post your review in the Comments below.