Runners make their way along the shoreline of Michigan’s Big Glen Lake for nearly the entire 13.1 miles of the race at the Glen Arbor Solstice Half Marathon & 5K, in a part of the country that ABC’s Good Morning America named “the most beautiful place in America.”


The race is set to take the field on an out-and-back course that starts and finishes near downtown Glen Arbor, at the intersection of South Lake Street and Lakewood Drive.

From there, the course heads southeast and starts a clockwise loop around the lake — with a brief curve around Fisher Lake — that features almost all fast and flat terrain, with the exception of a pair of hills, the first as runners are approaching the mile 3 marker, and the second on the part of the course known as Inspiration Point, between miles 8 and 9.

This stretch is the one that offers perhaps the best views of any spot on the race route, note the race organizers at Michigan-based Endurance Evolution, which hosts this race in addition to triathlons in nearby Traverse City and Lansing throughout the year.

Wide-angle views from atop the hill at the point show off the lake’s clear blue water and visitors can take in the view from the platform here on Michigan’s scenic Highway 22.

As they’re making their way along the final three miles of the half marathon route, runners will also cross a bridge on South Glen Lake Road, along the dam that divides Big and Little Glen Lakes, in the area known as the Narrows. From there, the course is almost all flat on the way back in to the race finish line near Glen Arbor.

After the race, runners and spectators can make just a short drive north to the shoreline of Sleeping Bear Bay to visit the area that won accolades from Good Morning America in 2011 and was voted by viewers as the most beautiful place in the country: Sleeping Bear Dunes National Lakeshore, known for its massively high dunes and 1870s-era lighthouse, and stretches more than 30 miles along the state’s Lake Michigan coastline. 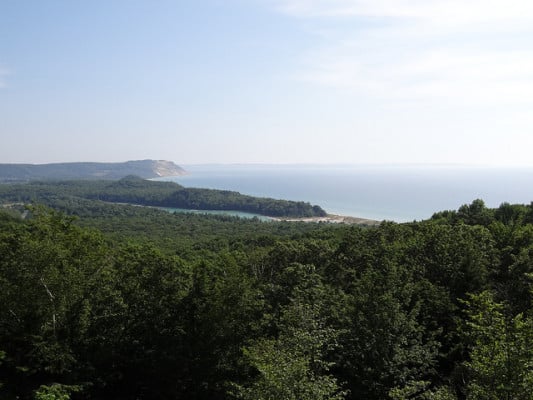 Proceeds from the race will go to benefit the Glen Arbor Fire Department, and there will also be a post-race barbecue and beer festival for all finishers and their friends and families.

Nestled between the shorelines of Glen Lake and Sleeping Bear Bay on Lake Michigan in the state’s Lower Peninsula, about 27 miles northwest of Traverse City and roughly 280 miles northwest of Detroit, Glen Arbor typically sees mild to moderately warm weather in June.

See the race route map for the Glen Arbor Solstice Half Marathon here.

To reserve your spot in the 2022 running of the Glen Arbor Solstice Half Marathon or 5K race, register online at RunSignUp here.

Ever run in the Glen Arbor Solstice Half Marathon? Share your impressions here, or post your review in the Comments below.