Just off the coast of this small city that looks out onto Lake Superior along Michigan’s Upper Peninsula, runners get a chance to run the trails, hills, beaches and forests of the Grand Island National Recreation Area at the Grand Island Trail Marathon & Half Marathon, which marks its 17th annual running this year.

The race takes runners both along the shoreline and through the heart of the forest on 13,500-acre Grand Island, which lies about half a mile off the coast of Munising and is accessible only by ferry boat.

Under the management of the National Park Service since 1990, when it was purchased by Congress from the Cleveland Cliffs Iron Company, Grand Island has been kept in its primitive, natural state to protect its forests, coastline and beaches, so modern amenities are minimal on the island.

Such a unique and pristine environment for running has helped earn the race accolades for the beauty and challenge of its terrain from publications like Runner’s World, which has called it one of the country’s best trail races for runners who are new to trail racing. From a look at the half marathon route — which follows the southern portion of the 26.2-mile full marathon course — it’s not too hard to see why.

Runners start the half marathon at William’s Landing, which lies at the southern tip of the island near the ferry docking area. From there, they follow what is roughly a counter-clockwise loop route around the southern half of the island, starting first with the trek northward along the shoreline of Murray Bay.

These first few miles are generally flat with just a few gently rolling hills as runners along the shore and then into the dense hardwood forests, along dirt forest roads. Between miles 1 and 2, runners pass Duck Lake on their left and then continue on right onto what is known as the tombolo, the narrow strip of land that connects the two larger sections of the island.

The route heads all the way to the end of the tombolo and then turns around, bringing runners out onto the white sand beach along Superior’s Trout Bay. You’ll notice high sandstone cliffs on either end of the beach, which is roughly a mile long, and you’ll also likely notice that your running slows here, thanks to the beach sand — organizers suggest sticking on the hard-packed sand wherever you can.

Once runners make it back over across the tambolo, they’ll next head into the forest and cut through the heart of the island. The steepest hills occur just as runners are heading into the forest here, between miles 5 and 6; after runners pass the mile 7 marker along the park road inside the old growth hemlock trees here, the course then heads downhill again as it brings runners toward the island’s west coast. 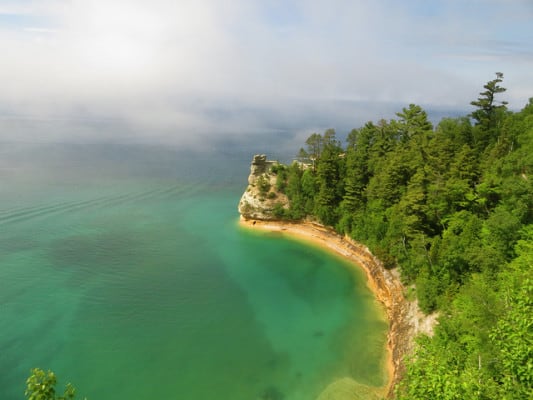 Along the Pictured Rocks National Seashore just off the coast of Grand Island, Michigan. (Photo by Rachel Kramer/flickr)

The final three miles of the half marathon unfold almost entirely along the western rim of the island here, with trail sections that take runners along the tops of the large cliffs that look out onto the water. There’s one final uphill around mile 11, and then it’s all downhill and flat back in to the finish line at Williams Landing.

Note: Runners will need to bring their own 20-oz. water bottle to carry with them at all times during the race, as paper cups will not be provided at the water stations, in keeping with the island’s environmentally protective measures.

Nestled along the southern shoreline of Lake Superior on Michigan’s Upper Peninsula, just over 400 miles northwest of Detroit and about 180 miles northeast of Green Bay, Wis., Munising typically sees its warmest weather of the year in July, which has brought record temperatures as low as 31°F (in 1960) and as high as 101°F (in 1988).

See the race route map for the Grand Island Trail Half Marathon here.

To reserve your spot in the 2023 running of Munising’s Grand Island Trail Marathon or Half Marathon, register online at Active.com here.

Ever run in the Grand Island Trail Half Marathon? Share your impressions here, or post your review in the Comments below.