Frigid temperatures, possibly snowy ground and — like the 1993 Bill Murray movie — the feeling of repeating yourself over and over await at western Michigan’s Groundhog Marathon and Half Marathon, which makes its 11th annual run on the weekend of Groundhog Day 2023.

The race takes runners through Millennium Park, which lies a short drive from downtown Grand Rapids and, when completed, will feature 20 miles of trails and reclaim some 1,500 once heavily used land for public recreation, which will one day make it about twice the size of New York City’s Central Park.

Runners — and walkers, the race is open to both — start the course in the Meadows just inside the eastern edge of the park, east of Maynard Avenue. From there, the course heads east along the Kent Trail to the Fred Meijer Millennium Trail, a newer paved trail that circles the park.

The course parallels Butterworth in the middle couple of miles and then turns left at the loop, starting a stretch that will head south into the park. There will be a stretch of crushed limestone trail in this section, which will later turn left again, bringing runners all the way back to the starting line area.

For full marathoners, the race is a certified Boston Marathon qualifying course, organizers note, but they also caution you to be aware that you’ll likely be running in wintry weather. “Don’t plan on the course being free of snow,” they say on the race websiite. “It’s paved, which means no underlying rocks and roots, but that’s about all we’re promising.”

The race is limited to 500 entrants, 250 in each race, and there will also be a warmup single-loop run around the course at 6:30 PM on Friday evening before Saturday morning’s race. 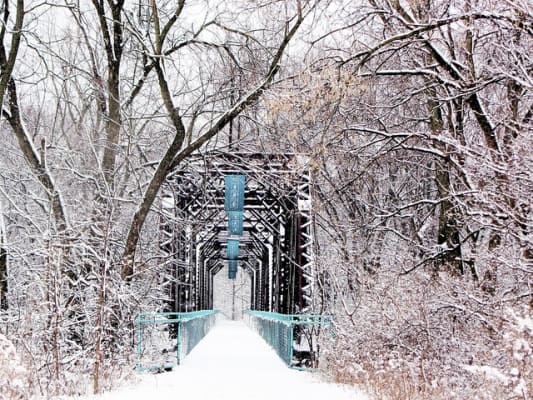 What the Kent Trails look like in wintertime. (Photo by Rachel Kramer/flickr)

Located in western Michigan, about 160 miles northwest of Detroit and roughly 30 miles west of the shoreline of Lake Michigan, Grand Rapids typically sees February temperatures between 18ºF and 33ºF, while rainfall here hits its lowest point this time of year, though the city sees an average of just over 12 inches of snow during the month.

See the race route map for the Groundhog Half Marathon here.

To reserve your spot in the late winter 2023 running of Grand Rapids’s Groundhog Marathon or Half Marathon, register online at RunSignUp.com here.

Ever run in the Groundhog Half Marathon? Share your impressions here, or post your review in the Comments box below.