Set for its inaugural running along the winding roads of Belle Isle Park, a 985-acre park on an island in the middle of the Detroit River between the U.S. and Canada, the Motor City Half Marathon features largely fast and flat park roads and a picturesque finish in front of the James Scott Memorial Fountain.


Runners – and walkers, the race is open to both – will start the race on Central Avenue near the western end of the park, whose history dates all the way back to the mid-1800s and whose original design was conceived by Frederick Law Olmstead, the legendary landscape designer whose creations include New York’s Central Park and Brooklyn’s Prospect Park.

From there, they’ll make their way along what is roughly a clockwise loop around Riverbank Drive, Lakeside Drive, Oakway and The Strand before running most of the loop a second time. After the second loop around, instead of turning on Picnic Way, the course will continue along The Strand to nearly the western tip of the island.

After that, runners will make a turn and head toward the park’s iconic James Scott Memorial Fountain, which was designed by the famed architect Cass Gilbert, who also designed the U.S. Supreme Court building in Washington, D.C.

Walkers and runners with strollers are welcome, as mentioned above, as long as they can maintain a pace of 15 minutes per mile or faster, organizers note.

Throughout the race, you’ll also be able to take in many of the sights and attractions the park is known for, including the Dossin Great Lakes Museum as well as the Belle Isle Zoo and the Belle Isle Aquarium. There’s even a beach on the island, open from June through Labor Day. 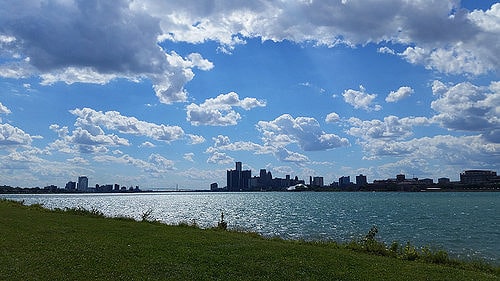 A view of downtown Detroit from Belle Isle Park. (Photo by Drew Tarvin/flickr)

Nestled along the banks of the Detroit River in southeastern Michigan, Detroit typically sees some of its hottest weather of the year in August, when record temperatures here have reached as high as 100ºF (in 1955) and as low as 45ºF (in 1965).

See the race route map for the Motor City Half Marathon here.

To reserve your spot in the late summer 2016 running of Detroit’s Motor City Half Marathon or 5K race, register online at Active.com here.

Ever run in the Motor City Half? Share your impressions here, or post your review in the Comments below.