Several hundred runners cross the finish line each year in all races combined at the late summertime running of the North Country Trail Marathon, 50-Mile Ultramarathon & Half Marathon, which will allow you to run its half marathon on Saturday and/or Sunday. It’s “one of the top trail runs in the United States,” organizers say, with the largest half marathon medal in the nation.

The race takes runners along scenic, single-track trails through this corner of the Manistee National Forest, which spans some 540,000 acres across the northwest end of Michigan’s Lower Peninsula, and is popular for outdoor recreation both in summer (fishing, boating, canoeing and hiking) as well as the winter, when it becomes a mecca for cross-country skiers and snomobilers.

In the late summer season, the trails along which runners will make their way will feature plenty of challenging hills but no stream crossings or rocky stretches, organizers note.

Though runners in the half marathon won’t actually run on it during their race — and those running the full marathon and ultra will cross it in a few spots — the race gets its name from the North Country National Scenic Trail, which is one of 11 such trails authorized by Congress and stretches some 4,600 miles between eastern New York state all the way to North Dakota.

Runners in all three races will follow out-and-back routes that start and finish at the area known as “Big M” in the forest, just off Udell Hills Road, and unfold in the hills just to the northwest of the road. Separate starting times for each race are now used, organizers add, now that the event has grown to more than 500 entrants. 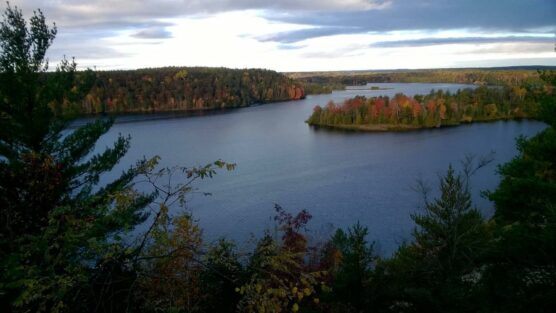 Located in Manistee National Forest on the northwestern side of Michigan’s Lower Peninsula, just over 115 miles north of Grand Rapids and roughly 230 miles northwest of Detroit, Wellston typically sees some of its warmest and wettest weather of the year in August.

See the race route map for the North Country Trail Half Marathon here.

To reserve your spot in the 2023 running of Wellston’s North Country Trail Marathon, Half Marathon or 50-Mile race, register online at the event website here.

Ever run in the North Country Trail Run? Share your impressions here, or post your review in the Comments below.