Winding country roads, a run through a covered bridge and the hilly and rugged natural trails are the challenge that greets runners at the summertime running of Lowell’s “Old Farts” Festival of Races, which feature a “Who Cut the Cheese?” 5K race, a 13.1-mile half marathon and a 26.2-mile full marathon.


Parts of the race are run along the western Michigan portion of the North Country National Scenic Trail, a 4,600-mile hiking trail that stretches all the way from New York state to North Dakota.

All three races in the event take runners along out-and-back routes that will move back to Lowell’s Fallsburg County Park along the Flat River. (Last year’s race took place in downtown Lowell, on an out-and-back course for the race near the Lowell Chamber of Commerce and the Robert E. Lee Showboat, which is docked along the Grand River near the Chamber of Commerce building.)

Though visitors to the Lowell area likely won’t be familiar with the showboat’s history — it’s actually the fifth to call the area home, as the first was built and launched with a riverboat cruise back in 1932 — it has a colorful past.

Legendary entertainers including Dinah Shore, Louis Armstrong, Bob Newhart and Milton Berle have all performed on it in the past, though today it mainly serves as a backdrop for this western Michigan city’s annual riverfront festival.

Runners in the half marathon will start the race with those running the full marathon and run the same route for the race’s first six miles. Along the way, the course offers up stretches that take runners through a covered bridge (the historic Fallsburg Covered Bridge, which was built in 1871 as a crossing over the Flat River and lies about 5 miles north of Lowell).

The race also follows a footbridge over the Flat River, and along several riverside trails that wind along the river, through thickly forested parkland areas before bringing runners back downtown for the race finish.

Organizers — at what else, the Old Farts Running Club based here in Lowell — say they expect a few hundred runners to turn out for the event. (If you have a moment, check out the event’s results page here; it’s a fair bet you’ve rarely seen race commentary like this club’s.) 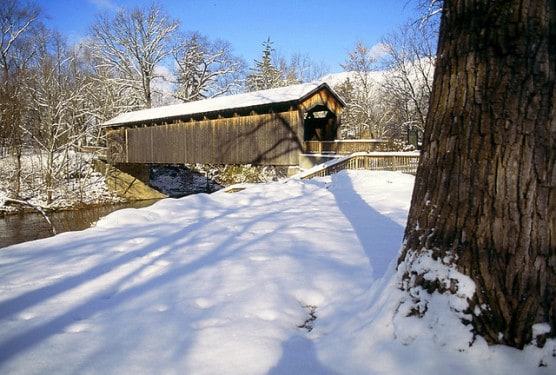 Located along the banks of the winding Grand River in western Michigan, roughly 20 miles east of Grand Rapids and just over 140 miles northwest of Detroit, Lowell typically sees some of its warmest and wettest weather of the year in August, which has brought record temperatures here as low as 39°F (in 1976) and as high as 102°F (in 1918).

See the race route map for the Old Farts Half Marathon here.

To reserve your spot in the 2017 running of Lowell’s Old Farts Marathon, Half Marathon or 5K race, visit the event website here.

Ever run in the Old Farts Half Marathon? Share your impressions here, or post your review in the Comments below.