If ever a race had an appropriate name, Mount Pleasant’s Snowman Half Marathon, 10K & 5K certainly fits the bill. Run in the middle of the winter season here in this small central Michigan city that lies just over 150 miles northwest of Detroit, the race will definitely test the mettle of every runner who comes out to take part in the event.

For each of the three races in the series, runners will follow an out-and-back course that starts and finishes near the campus of Central Michigan University, home to more than 20,000 students here on its main campus in Mount Pleasant.

From the starting line at the Runners Performance store on South Mission Road, runners head out on what is essentially an upside-down T-shaped route, running along West Campus Drive and Denison Drive as they pass by Theunissen Stadium, home of the CMU Chippewas baseball team.

The first mile and a half is followed by turns onto Crawford Road, Deerfield Road and Lincoln Road, where runners turn left and head south along the road until they reach the bottom of the “T,” at the intersection with Walton Road.

There are two quick out-and-back stretches along Walton and then runners head back onto Lincoln Road, where they re-trace their steps in the opposite direction back to the university campus for the race finish.

There’s roughly 100 feet in elevation change from the starting line to the highest point in the race, and the climb unfolds very gradually over the first half of the route, followed by an equally gradual decline as runners are making their way back into campus for the finish line.

The race begins at 9:00 AM, and organizers note that runners need to be prepared for any kind of inclement weather — rain, freezing rain, ice, sleet, snow and anything in between. 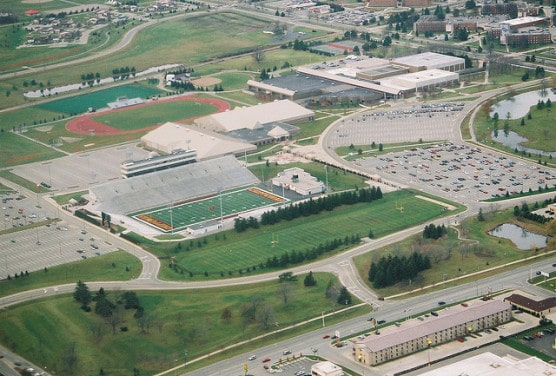 Aerial view of Mount Pleasant, Mich., near the starting line. (Photo by Rebecca/flickr)

Be ready for some very cold temperatures and possible frozen precipitation if you’re running in this central Michigan city in mid-January, which lies in central Michigan about 150 miles northwest of Detroit and roughly 85 miles northeast of Grand Rapids.

See the race route map for the Snowmans Half Marathon here.

To reserve your spot in the winter 2019 running of Mt. Pleasant’s Snowmans Half Marathon, 10K or 5K race, register online at RunSignUp.com here.

Ever run in the Snowmans Half Marathon? Share your impressions here, or post your review in the Comments box below.