With the exception of races in places like Miami or Key West, this race is no doubt in the running for one of the flattest anywhere in the United States, as it is run along the banks of what is perhaps America’s most storied river, the winding Mississippi River that gives the race its name, making its 10th annual running in the late winter season of 2022.


The race organizers — a pair of Teach for America teachers who came up with the idea for the race while working at Lakeside High School in nearby Lake Village, Ark. — note that the race takes runners through some forgotten pieces of the nation’s history, including the site where Charles Lindbergh made his first nighttime flight as well as the largest ox-bow lake anywhere in the United States.

(What is an “ox-bow” lake, you ask? It’s a U-shaped body of water made by diverting water from a river — in this case, the Mississippi River.)

Runners can choose between running 26.2 or 13.1 miles, and the half marathon course will start at the mid-way point of the full marathon route, near the intersection of Highway 82/278 and Levee Road. From there, runners head northeast and almost immediately hit the recently opened 82 Bridge that spans the river and features the only hilly stretch anywhere along the race course. After they make it over and down the bridge — also known as the Greenville Bridge — runners then head northeast along the highway into Greenville, along fast and flat paved terrain the entire rest of the way.

The race finishes in downtown Greenville, the home of famed writers William Alexander Percy and Shelby Foote (the author of the beloved Civil War trilogy and the face of Ken Burns’s The Civil War documentary in 1990 for PBS) as well as Muppets creator Jim Henson. Runners will head north along Washington Avenue all the way into the city, turning left near the courthouse to head in to the finish line near the riverfront park, Stein Mart Park.

Shuttle buses will take runners in both races to each starting line, as runners will meet at the finish line to board the buses to the start. Runners in the full marathon or Delta Double Down challenge will have 7 hours to complete their 26.2 miles, while those running the half marathon will have 6 hours to finish their race.

Musicians will be out on the course playing Delta blues music, organizers add, and proceeds from the race will go to benefit the Washington County and Southeast Arkansas Community Foundations. 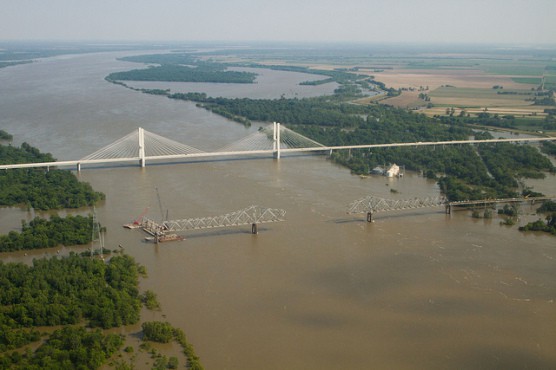 An aerial view of the Greenville Bridge spanning the Mississippi River. (Photo by USDA/flickr)

Nestled along the banks of the Mississippi on the state’s eastern border with Arkansas, about 120 miles northwest of Jackson and roughly 150 miles southeast of Memphis, Tenn., Greenville typically sees February temperatures that average between 37°F and 58°F, while precipitation amounts average about 4.7 inches for the month.

See the race route map for the Mississippi River Half Marathon here.

To sign up for the late winter 2022 running of Greenville’s Mississippi River Marathon or Half Marathon race, register online at the race website here.

Ever run in the Mississippi River Half Marathon? Share your impressions here, or post your review in the Comments box below.