Stretches past Busch Stadium, the St. Louis City Hall and the city’s famed Gateway Arch are just a few of the sights runners will see at October’s Rock ‘n’ Roll St. Louis Half Marathon, the race formerly known as the Lewis & Clark Marathon that saw more than 8,100 runners and walkers cross the finish line last year.


Runners in the half marathon start at the intersection of Market Street and Tucker Boulevard in downtown St. Louis, in the area known as Washington Square Park that lies just blocks from the famous Gateway Arch overlooking the Mississippi River.

From there, the course takes runners in the half marathon out on what is basically a counter-clockwise loop through the city, starting off with a stretch through downtown.

The course starts off by taking runners east toward the arch and the river, all the way to just a couple of blocks from the arch, as they make the turn left onto Broadway to head north. Before that, however, runners will pass right by Busch Stadium, the home of the St. Louis Cardinals baseball team, as they make the stretch along Clark Avenue to Broadway. From there, the course heads north and then west through the city, and remains mostly flat through the first few miles of the course.

The next stretch of the race brings runners west toward the campus of Saint Louis University, and becomes hillier as runners head through miles 3 and 4 along Delmar Boulevard and Washington Boulevard on the way toward the university.

Following the stretch along Lindell Boulevard, which runs alongside the northern edge of campus, runners then turn left and head south on Vandeventer Avenue, which they follow for roughly the next mile on the way to Tower Grove Avenue, which leads the field down to the Missouri Botanical Garden and Tower Grove Park.

Once runners make it to Tower Grove Park — which occurs just past the mile 8 marker — the half marathon course makes a left turn and head east.

The next few miles feature a series of turns northward and eastward as runners make their way back into downtown, passing by Lafayette Park and Compton Hill Park on the way to the finish line on Chestnut Street. 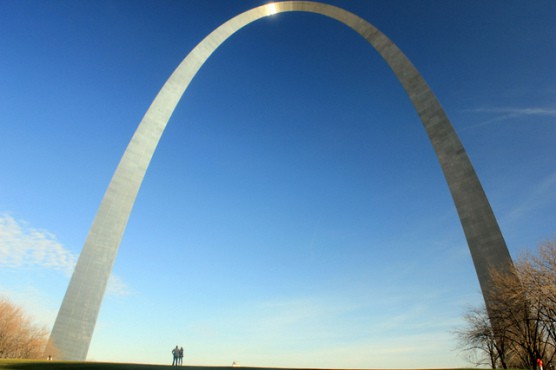 Nestled along the riverbanks of the Missouri River, the city of St. Louis typically sees warm to mild weather in the late summer-early fall weeks, with drier conditions than the summer. October has brought record temperatures here as low as 28°F (in 1987) and as high as 94°F (in 2006).

To reserve your spot in the 2017 running of the Rock ‘n’ Roll St. Louis Marathon or Half Marathon, register online at the event website here.

Ever run in the Rock ‘n’ Roll St. Louis Half Marathon? Share your impressions here, or post your review in the Comments below.