Perhaps the most distinguishing feature of the hilly and sometimes difficult course at this race is an abundance of what many other American cities have, but not nearly as many of — majestic, scenic fountains like those found in European capitals and tourist meccas like London and Rome.

Along the route, runners will see as many as 15 of the more than 200 fountains dispersed throughout the city, in addition to parks, downtown neighborhoods and historic districts.

The half marathon, like the full marathon and 5K race, begins in the Plaza area at the Nelson-Atkins Museum of Art. Known for its diverse art collections and the distinct shuttlecocks on the south side near the start line, the museum sits about four miles south of downtown and serves as the finishing line for the race.

From there, the course follows a mostly-clockwise loop route, taking runners first westward through the Plaza area (and passing two of Kansas City’s famed fountains) before heading north toward Penn Valley Park and Liberty Memorial.

The half marathon course continues through the Power and Light District, known for its shopping, dining, and entertainment, including the Kansas City Live! block filled with live music venues. The course continues south through the district before looping past Parade Park and down The Paseo.

This being Kansas City, the race route is of course a hilly one, with the most challenging uphill stretches occurring at the start of the course heading north and between miles 4 and 6 in the first half of the race, with a slow and steady uphill climb with some small hills during the second half of the race.

Runners will experience an elevation gain of over 100 feet at the first big hill in the first 1.5 miles, from a low of about 850 feet above sea level at the start.

After the first hill at the start of the race, runners experience gentle rolling hills before coasting downhill over 150 feet near Liberty Memorial. The course continues its slow and steady rolling hills while running through downtown Kansas City, with one last slow uphill climb for much of the Paseo stretch.

Fortunately it’s a (mostly) downhill finish from there, with one small hill before crossing the finish line.

Though the time limit shouldn’t be a problem for most half-marathon participants, runners will be limited to 6 hours — enough time for walkers to participate in the half marathon, as both the half and the 5K are open to walkers as well as runners. 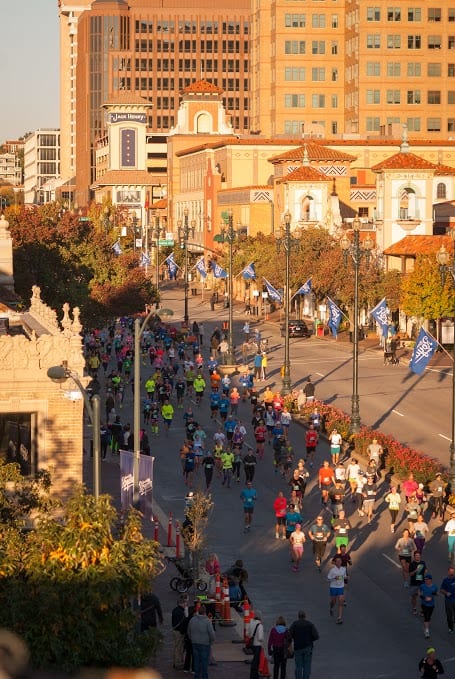 Set along the state’s western edge near the nexus of the Missouri and Kansas rivers, Kansas City tends to see milder, drier weather conditions in the early autumn, though conditions can still be fairly warm at times.

See the race route map for the Garmin Kansas City Half Marathon here.

To reserve your spot in the 2023 running of the Garmin Kansas City Marathon, Half Marathon, Relay & 5K, register online at RunSignUp.com here.

Ever run in the Kansas City Half Marathon? Share your impressions here, or post your review in the Comments below.