Bozeman Marathon and Half Marathon

Surrounded by mountains and located just over 90 miles north of Wyoming’s Yellowstone National Park, this southern Montana town — known as the “Valley of the Flowers” — plays host to the 11th annual running of the Bozeman Marathon this year.

Both the half and the full marathons follow point-to-point courses that start outside town and finish in downtown Bozeman’s Bogart Park, along Church Avenue and just south of East Main Street.

While the full marathon begins southwest of Bozeman along the banks of the Gallatin River — portions of which served as filming locations for the Robert Redford-directed “A River Runs Through It” — the half marathon starts at the mid-way point of the full marathon, on Cottonwood Road.

From there, the half marathon follows a route that is best described as a long, gradual downhill descent over the race’s 13.1 miles, with views of the Bridger Mountain Range in the background to the north and the Gallatin Range to the south.

As they make their way north toward Bozeman over the next several miles, runners who aren’t from the local area will get to see why they call this “Big Sky Country,” as the mountains rise up into the brilliant blue skies (depending on the weather, of course) overhead.

The first several miles of the course take runners on paved country roads leading into Bozeman; once runners reach about the mile 10 marker of the half marathon (and about the mile 23 marker of the full marathon), they’ll head off the roads and onto the Sourdough Trail, which runs alongside Sourdough Creek and is shaded by cottonwood and aspen trees along its 3.2-mile run.

The course follows the trail for about a mile and a half into Graf Park, and then runners leave the trail and turn onto Fairway Drive between miles 11 and 12.

Runners hit the home stretch of the race once they make the turn from Fairway onto Black Avenue, which they follow for roughly half a mile until they meet up with a second trail, the Gallagator Linear Trail, a 1.5-mile crushed stone trail.

The course stays on the trail for less than half a mile, however, and turns off on South Church Avenue to bring runners in to the finish in Bogart Park. 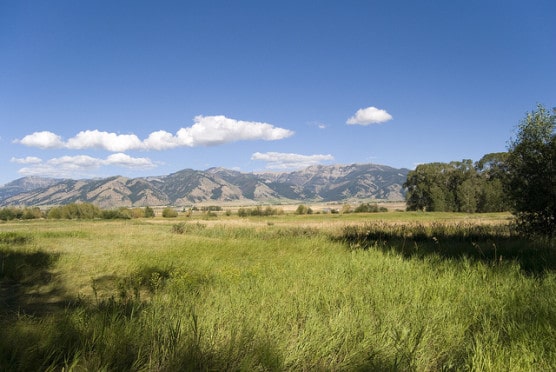 Located along the northern edge of the Gallatin National Forest in southern Montana, just over 200 miles east of Missoula along Interstate 90, Bozeman typically sees cool to moderately warm weather in September, which has brought record temperatures here as low as 12°F (in 1926) and as high as 95°F (in 1947).

See the race route map for the Bozeman Half Marathon here.

To reserve your spot in the 2023 running of the Bozeman Marathon, Half Marathon or 5K race, register online at RunSignUp.com here.

Ever run in the Bozeman Half Marathon? Share your impressions here, or post your review in the Comments below.