Sorry Bout That Half Marathon

When you take to the roads and highways in and around this small town of just over 4,000 in northwestern Montana, you’ll be braving both the terrain and what very well could be bitterly cold weather at the “Sorry ‘Bout That” Half Marathon, which is set to follow a clockwise loop largely through the countryside just south of town.

From there, runners follow a clockwise loop through the countryside outside the town, with a pass by the Pablo National Wildlife Refuge and later through Polson, before heading back south along the path that parallels Highway 93 to the aquatic center for the race finish.

Along the way, they’ll have views of the lake at Pablo Reservoir and what could be some white, snow-covered farm fields for much of the course. They’ll also pass through several neighborhoods and the town center in the second half of the race, as well as the Polson Flathead Historical Museum when they run from west to east along 7th Avenue through Polson.

Surrounding this small town, which was named for rancher David Polson from Montana’s frontier era, are plentiful national wildlife refuges and forests, including the Swan River National Wildlife Refuge, the National Bison Range and Glacier National Park to the north, where runners can see real (but rapidly dwindling) glaciers inside the park’s boundaries. 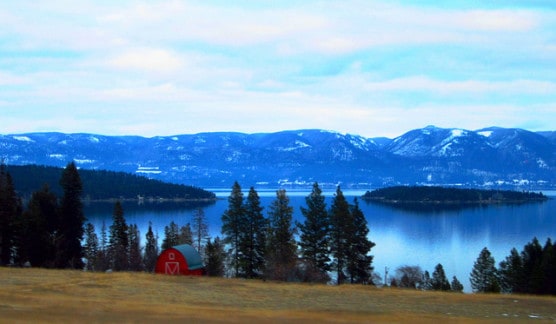 Looking out onto Flathead Lake, Montana. (Photo by Peggy2012/flickr)

Nestled along the southern end of Flathead Lake in northwest Montana, among several national forests and national wildlife refuges and about 70 miles north of Missoula, Polson typically sees very cold and snowy weather in mid-January, a month that has brought record temperatures here as low as 30 degrees below zero (in 1950) and as high as 58 degrees (in 1953).

See the race route map for the Sorry ‘Bout That Half Marathon here.

To reserve your spot in the winter 2023 running of Polson’s Sorry ‘Bout That Half Marathon, register online at RunSignup.com here.

Ever run in the Sorry ‘Bout That Half Marathon? Share your impressions here, or post your review in the Comments below.