Temperatures will be chilly and the scenery will be stunning at the Yellowstone Half Marathon, which is set for its 5th annual running just outside the entrance to Yellowstone National Park, a place filled with geysers, geothermal pools, canyons, mountains and forests spread 3,400 square miles in parts of Montana, Wyoming and Idaho.

Runners should note that they won’t actually run this race inside the national park — though they will be a very short drive from the park during the race, and will be able to visit the park before and after the event.

The course itself is filled with natural beauty, as runners will make their way largely along dirt roads and trails inside the Gallatin National Forest just outside West Yellowstone, a small town here in eastern Montana that’s home to a little over 1,200 year-round residents, whose population swells in the summer with visitors to the park.

The half marathon follows an out-and-back course that starts and finishes on Old Airport Road, along the western edge of town, and takes runners first into town, along Iris Street, Yellowstone Avenue and Electric Street, and features a stretch past the Grizzly and Wolf Discovery Center, a wildlife sanctuary for wolves and bears that have been removed from Yellowstone.

After that, runners head out into the Gallatin Forest, which spans some 3.1 million acres and is home to rugged mountains and forests, including the tallest peak in Montana.

The biggest hills of the race occur around the midpoint, as runners are making their way along Corrette Ridge Road. Runners will climb a little over 300 feet between mile 5 and mile 7, and then give nearly all of that climb back between miles 7 and 9, as they’re running alongside the South Fork of the Madison River.

Runners will finish the race back in West Yellowstone, on Old Airport Road where they started. 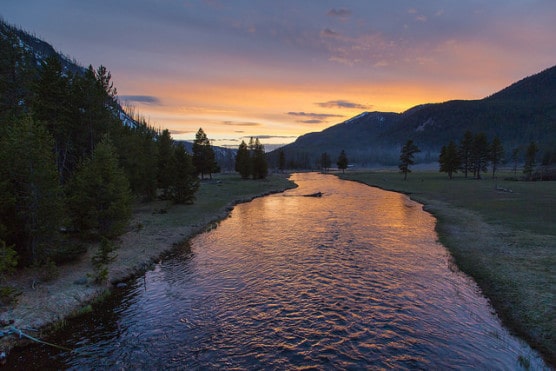 Nestled at about 7,000 feet above sea level along the border between Montana and Wyoming and roughly a mile from the west entrance to Yellowstone National Park, West Yellowstone sees some of its warmest and driest weather of the year in June, which has brought record temperatures here as low as 18ºF (in 1924) and as high as 93ºF (in 1936).

See the race route map for the Yellowstone Half Marathon here.

4 hours, which means you’ll need to keep a pace of about 18 minutes per mile or faster.

To reserve your spot in the 2023 running of Montana’s Yellowstone Half Marathon or 5K race, register online at RunSignUp.com.

Ever run in the Yellowstone Half Marathon? Share your impressions here, or post your review in the Comments below.