Filled with a combination of pristine prairie grasses and hilly sand dunes that lie atop the massive Ogallala Aquifer here in the Cornhusker state, the region known as the Sandhills of Nebraska plays host to the annual Sandhills Marathon & Half Marathon this year as spring is giving way to summer.

The race features a long, gradual downhill point-to-point route that unfolds along the Brownlee Road in Cherry County, Neb. Runners in the half marathon start their race at the mid-way point of the full marathon — just as those running the 26.2-mile race are nearing the half-way point — and follow the same route all the way in to the finish line near the intersection with Highway 83.

Along the way, the course unfolds through the stark, vast and still largely untouched beauty of the Sandhills region — despite the nation’s westward expansion over the past two centuries, most of it still has never been used for agriculture — giving runners a much different experience than most big-city races offer.

Aside from the paved roads and fencing along the highways, there are few signs of civilization out here on the prairie, where you can see literally for miles when the weather cooperates.

Runners remain on the Brownlee Road for virtually the entire race, dropping just over 100 feet over the course of the entire half marathon route — so the race is one of the most gradual downhill stretches you’ll find anywhere.

With the exception of a brief out-and-back on Seneca Road in the tiny town of Brownlee, which includes an out-and-back over the bridge that spans the North Loup River, all of the rest of the race stays on that one road, the Brownlee Road, all the way to the finish line.

While they’re on the course, runners will be racing just a few miles south of Nebraska’s Valentine National Wildlife Refuge, whose 72,000 acres are filled with shallow lakes and marshes that are home to some of the best bird-watching areas around the northern central Plains region. 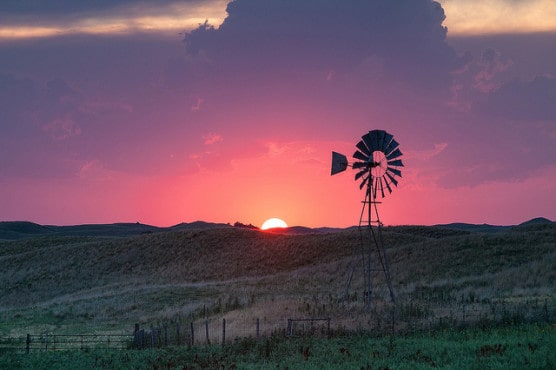 A windmill at sunset in Valentine, Nebraska. (Photo by Kelly DeLay/flickr)

Thousands of geese and ducks stop to feed here during their annual spring migration period in April and May, and the refuge also features more than 40 miles of hiking trails among its sand dunes.

Located just miles from the South Dakota state line in northern Nebraska, nearly 300 miles northwest of Omaha and roughly 235 miles west of Sioux City, Iowa, Valentine typically sees its wettest weather of the year from May through July, and June has brought record temperatures as low as 30 degrees (in 1969) and as high as 110 degrees (in 1988).

See the race route map for the Sandhills Half Marathon here.

To reserve your spot in the either the half or the full marathon at Valentine’s 2023 Sandhills Marathon, register online at RunSignUp.com here.

Ever run in the Sandhills Half Marathon? Share your impressions here, or post your review in the Comments below.