Seemingly every hue of red, orange and burnt earth colors surround you as you run along the Scenic Canyon Road for the Red Rock Canyon Marathon, Half Marathon & 5K, which takes place in the national conservation area by the same name about a half-hour’s drive to the west of Las Vegas, Nevada.

The park, which sees more than a million visitors each year, is set up perfectly for a half-marathon as its Scenic Canyon Road, which begins at the Visitor Center, follows a 13-mile course through many of the park’s most scenic and memorable vistas.

The course is paved throughout the entire race, and features some fairly big changes in elevation — it starts at 3,880 feet above sea level and reaches a peak of 4,771 feet around the half-way point in the race, before descending again in the second half of the race toward the finish.

The half marathon starts about 2 miles from the visitor center and follows a gradual uphill in its first 6 miles toward the summit overlook area, between White Rock Hills and Turtlehead Mountain. After the half-way point, the race begins a steep downhill (what race organizers say is a “screaming downhill”) along the scenic road toward the finish line.

Because no parking is available at the race start & finish line areas, runners will be transported by bus from a pickup area in Las Vegas (the Boca Park shopping village, across the street from the event’s host hotel, the Suncoast Hotel and Casino).

The course will remain open to car traffic during the race, and the lane for runners will be marked by cones. 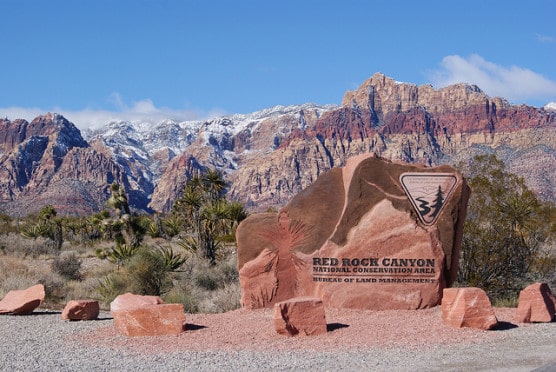 Near the entrance to the Red Rock Canyon National Conservation Area, Nevada. (Photo by U.S. Bureau of Land Management/flickr)

Set in the sands of Nevada’s Mojave Desert and surrounded by mountains, Las Vegas is well-known for its arid climate with plenty of summer heat and little to no rain. The middle weeks of winter, however, bring much milder and cooler weather.

To reserve your spot in any of the races at the 2024 running of Marathon or Half Marathon, register online at RunSignUp.com here.