Rock ‘n’ Roll Running Series Las Vegas returns to the Entertainment Capital of the World for a flat and fast course on the famed Las Vegas Strip.

Nicknamed the World’s Largest Running Party, the event starts on Thursday evening with day one (of three) of the Health & Fitness Expo at Resorts World Las Vegas. Hosted by one of the newest properties on The Strip, runners can pick up their packets at the Expo while jamming out to the DJ and sipping on the craft cocktail.

The party continues with a Saturday night 5K ending at the Fremont Experience under the World’s Largest Slot Machine, Slotzilla. After a quick 3.1 mile spin through historic Las Vegas, runners and spectators alike can enjoy the Saturday Night Fan Fest Experience at the Downtown Las Vegas Events Center. From DJ battles to glow-in-the-dark game zones, or live music to Vegas-style entertainment, you won’t want to miss out on the pre-race party that’s located one block from the 5K finish.

On Sunday, participants will gather at the Start Line Festival behind Planet Hollywood until their time is called to enter start line on The Las Vegas Strip. Starting at 4:30pm for both the 10K and Half Marathon distances, runners will have the opportunity to run The Strip at night, taking in all the sights and scenes Las Vegas has to offer. In addition to passing famous properties such as the Bellagio, Caesars Palace, and Wynn, participants will be entertained the entire route with performers, live music, DJs and more. Half marathoners will even make the big screen at Resorts World Las Vegas when they are live-streamed on the 100,000 square-foot screen.

A finish line on The Strip next to the erupting Mirage volcano is just one reason as to why this event is one of the most iconic races in the world. After the event, runners can celebrate at Come as You Are Parties where participants are encouraged to show up to the after-parties in running clothes and their finisher medals.

In the past couple of years, the race starting time was moved to the early evening instead of in the early morning hours — 4:30 PM for the full marathon and the half marathon, just as the sun was starting to set. There will be a time limit for runners out on the course — the full marathon time limit is 5 hours, while those running the half must finish the race within 4 hours.

Along the race route, runners will get to take in all of the lights, glamour and glitz that Las Vegas has to offer, as they pass by casinos like the Bellagio, the Venetian, Caesars Palace, the Flamingo, the Mirage, Treasure Island and the Wynn Casino, which lies next to the Wynn Golf Club.

Runners make the turnaround near the northern end of Las Vegas Boulevard and near some of the classic casinos like the Golden Nugget before heading back onto Las Vegas Boulevard for the return route back to Best Western Plus and the race finish line.

Runners interested in taking part in the race should enter as soon as they can, as the race typically fills up in most years — more than 20,000 runners and wheelchair competitors cross the finish line in both races combined each year, with more than 20,000 of those finishers completing the half marathon alone. 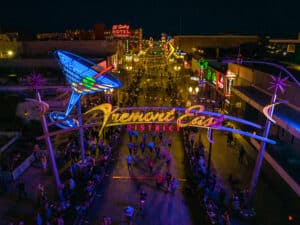 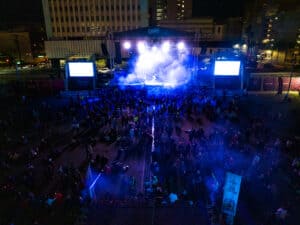 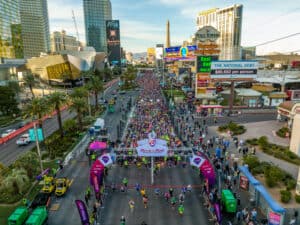 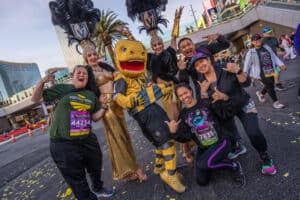 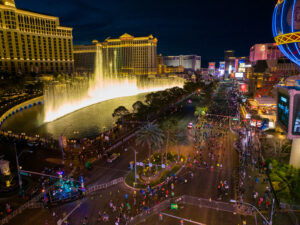 Located in the southern corner of Nevada, just over 260 miles northeast of Los Angeles, Las Vegas typically sees February temperatures that average between 41°F and 66°F. Thanks to its location in an arid basin within the Mojave Desert, the area receives very little precipitation, averaging about two-thirds of an inch for the month.

See the race route map for the half marathon here and the official course map here.

To reserve your spot in the winter 2023 running of the Rock ‘n’ Roll Las Vegas Half Marathon, 10k, or 5k race, register online at the event website.