Lying just outside the city but still a world removed from the pulsating neon lights, glitz and glamour of the Las Vegas Strip, the Calico Hills of Nevada’s Red Rock Canyon National Conservation Area beckon the hundreds of runners who make their way out here each year to run Calico Racing’s Red Rock Twilight Red Rock Canyon Half Marathon and Marathon.

Runners will get a chance to run an out-and-back version of the course in the evening at the annual Twilight Red Rock Half Marathon, 10K & 5K run, which features a 13.1-miler takes runners from the exit of the Scenic Loop Drive up to the summit overlook at an elevation of about 4,771 feet.

From there, they’ll follow the Red Rock Canyon Scenic Loop against traffic for 6.55 miles up and around the basin that lies between the Calico Hills, the White Rock Hills and Turtlehead Mountain here in the Mojave Desert.

The course unfolds along a clockwise direction around the Scenic Loop, up the summit overlook and then back south again to the exit at Highway 159, where the half marathon finish lies.

Because the race will be run at night, runners will be required to wear both reflective clothing (on the front and back) as well as a headlamp or a hand-held flashlight to carry with them out on the course.

The early evening and nighttime scenery is said to be truly spectacular here in the more than 195,000-acre recreation area, with the waning sunlight dancing off the sandstone rock formations as runners are starting the race, followed by the starry sky overhead as the sun goes down — and the lights of Las Vegas off in the distance.

As the starting line lies at an elevation of about 3,740 feet above sea level, there’s an elevation gain over the course of the race of just over 1,000 feet between the start and the summit overlook, which lies at the turnaround point on the Scenic Loop road.

Once you make it past the summit, it’s mostly a long, gradual downhill descent from there to the finish line. 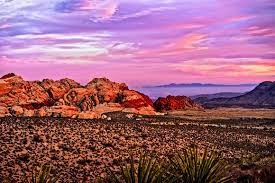 Located in Nevada’s southwestern corner, Las Vegas typically typically sees mild early mornings and hot afternoons in October, which usually sees zero rainfall this time of year. Record temperatures during the month have reached as low as 26°F (in 1971) and as high as 103°F (in 1978).

See the race route map for the Twilight Re-Run Half Marathon here.

To reserve your spot in the 2023 running of Las Vegas’s Twilight Red Rock Half Marathon, 10K or 5K race, register online at RunSignUp.com here.

Ever run in the Twilight Red Rock Half Marathon? Share your impressions here or post your review in the Comments below.