Known for its combination of gorgeous New England seaside scenery and a course that remains flat for nearly the entire race down the New Hampshire coast, the Eastern States 20-Miler and the 13.1-mile Run for the Border Half Marathon make their annual springtime running this year, after last year’s race saw several hundred runners cross the finish line.

The race follows a point-to-point course with two starting lines. The first, for the 20-mile run, starts in nearby Portsmouth, while the half marathon starts down the coast at Wallis Sands Beach State Park in Rye, N.H.

From there, runners in the half marathon join the twenty milers and follow the route as it winds from Wallis Sands through a series of small coastal towns and villages like Rye Harbor, Jenness Beach and Hampton Beach, all the way south to the race finish line in Salisbury, on the New Hampshire-Massachusetts state line.

You’ll quite literally be running through a piece of New England history at this race, as the course takes runners in the 20-miler through Odiorne Point State Park, the site of the state’s first settlement back in the early 1600s.

This stretch features what is perhaps New Hampshire’s biggest undeveloped coastal land area, and runners here will make their way first through the park’s forests before heading out along the edges of the marshes near its southern end, passing by the Seacoast Science Center along the way.

Runners in the half marathon — which, unlike most running events, is the smaller of the Eastern States event’s two races, with just a few hundred finishers each year — won’t miss out on the scenery.

The course features plenty of beach views on the left and quaint coastal homes on the right side of 1A as they head south toward Salisbury, passing by the marshes at Rye Harbor State Park and Hampton Beach along the way.

Once the course makes its way into Hampton Beach and runners cross the bridge just after passing through Hampton Beach State Park, the race enters the home stretch to the finish line between Hampton and Salisbury Beach.

Both races have a scheduled starting time of 11:00 AM, and the course for the race is a USATF (USA Track & Field) certified course. 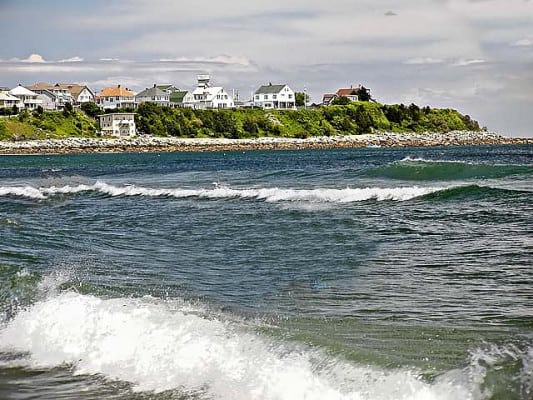 Hampton Beach, New Hampshire, which runners make their way past near the end of the race. (Photo by Jim Lawrence/flickr)

Nestled along New Hampshire’s Atlantic coastline, about 6 miles south of Portsmouth and roughly 60 miles north of Boston, Mass., Rye typically sees March temperatures that average between 26°F and 46°F, while precipitation amounts average just over 4.3 inches for the month, making March one of its wettest months of the year.

See the race route map for the Eastern States Half Marathon here.

To reserve your spot in the 2023 running of Rye’s Eastern States Half Marathon (or the Eastern States 20 miler), register online at LightBoxReg.com here.

Ever run in the Eastern States Half Marathon? Share your impressions here, or post your review in the Comments below.