Note: A virtual option is available for this event, to be run anytime from November 1 to November 14. Registration details are included below.

The Princeton Half Marathon will hold its 9th annual running in early November, in the town best known as the home of world-renowned Princeton University in central New Jersey, which also served as the filming location for 2001’s Academy Award-winning A Beautiful Mind and was also the home of its most famous resident, Albert Einstein.


Runners will follow a counter-clockwise loop course through both the university campus and the surrounding city on paved streets throughout, along a course that will take them past the D&R Canal, Princeton University and the Institute for Advanced Studies, Einstein’s house and Lake Carnegie, for an event to which race organizers say they expect to attract as many as 1,000 runners.

Palmer Square near the northern edge of campus will serve as the bag drop and starting line area where runners will be able to drop their belongings, get warmed up and size up the competition. Runners will line up on Chambers Street for the start and head west and south in the opening miles of the race.

From Chambers, the course first turns left on Paul Robeson Place. From Robeson Way, the initially flat and fast course will lead runners through Presidents’ Promenade, where runners will see the homes of former presidents Grover Cleveland and Woodrow Wilson.

Through Einstein Mile & Battlefield Breakthrough, runners will pass the homes of Albert Einstein and run along the same path of George Washington as he led Revolutionary troops during the most decisive battle during the Revolutionary War.

Next, runners make their way toward Oppenheimer Atomic Hill, where they’ll pass by the home of J. Robert Oppenheimer — the inventor of the atomic bomb — and then follow the course around to Neumann’s Curve, where the homes and hangouts of computing genius Richard Feynman, John von Neumann, Kurt Godel and Max Veblen lie.

The race’s steepest hills occur in the second half of the race, especially in the stretch along Snowden Lane, as runners can expect a long, steady uphill climb between mile markers 8 and 10.

All proceeds from the event will go to benefit HiTOPS Health Center, a locally based nonprofit dedicated to adolescent health care since 1987. The race is the first of its kind to take place in the Princeton area in more than two decades, so organizers (including CrowdConnect, the race management company that’s organizing the event) say they hope to build an event that will continue for years to come. 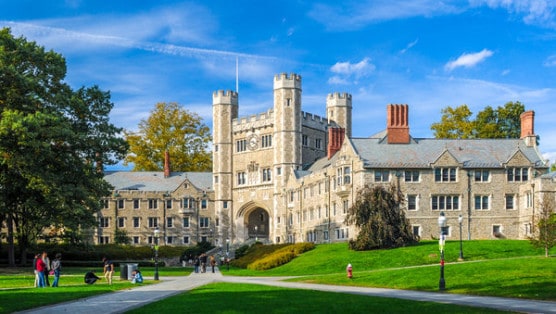 Nestled along the edge of Carnegie Lake in central New Jersey, about 45 miles northeast of Philadelphia and roughly 50 miles southwest of New York City, Princeton typically sees cool to mild (and sometimes quite cold in the mornings) weather in November, where temperatures typically range from the low 30s to the high 50s.

See the race route map for the Princeton Half Marathon here.

To reserve your spot in the 2021 running of the Princeton Half Marathon, register online at RunSignup.com here.

Ever run in the Princeton Half Marathon race? Share your impressions here, or post your review in the Comments below.