Whether you’re superstitious or not, or just enjoy a good ghost story, you’ll likely get a kick out of running the all-new race event that’s set to take runners along a nearly three-mile-long stretch of the infamous Shades of Death Road here in northern New Jersey, for a “scary” race that takes place — when else? — in the month of Halloween.


The road that gives the race its name stretches from just north of Allamuchy all the way southwest to the nearby village of Marble Hill, and whether deserved or not, it has come to be associated with all manner of scary stories over the decades.

Both history and legend tell of murders that have taken place along the road, as well as the Native American tribes that once lived here, and whose souls are rumored to still inhabit the dark, shaded forests where wispy gray fog often settles in on the lakes, ponds and streams around here.

Of course, that’s all the more reason to be thankful you’ll be running the race in the light of day, with a starting time guaranteed to ensure that the sun has risen — 9:00 AM, for both the half marathon and the 6.66-mile Devil’s Run race.

From the starting line at the Allamuchy Township School on Alphano Road (County Road 613), runners then head out on a clockwise loop route that takes them west along Alphano Road, north along Long Bridge Road, west again on Gibbs Road and then east on Shades of Death Road, which they follow for roughly the next three miles.

The course brings runners east all the way to County Road 612, where they turn right and head south toward Allamuchy and back to the school, where they pass the starting line and then make the loop a second time, to get in their 13.1 miles.

Portions of the race are shaded with trees along the rolling country roads, while others are out in the sun, alongside wide-open farm fields. The biggest hills occur in the early going of each loop section, as runners hit the steepest hill just before they reach the mile 1 marker, as they near Interstate 80. From there, the course drops again, and then features mostly gently rolling hills for the rest of the course.

Here’s how the race organizers described the race a few years back, in a note sent in to HalfMarathons.Net (and for more on Shades of Death Road, find it here on Weird New Jersey):

“We are celebrating with a special commemorative Shades of Death medal for all of our half marathon finishers. Whether you’re a casual runner or competitive athlete, this race is perfect for you. The 13.1-mile course will lead you through the mysterious Shades of Death Road on your way to a fun-filled finish at Allamuchy Township School.” 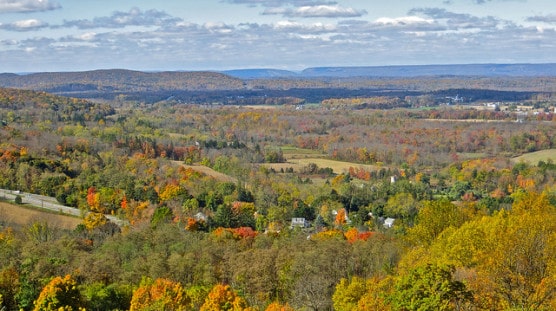 View of Allamuchy, N.J., from above. (Photo by ellenm1/flickr)

See the Shades of Death Half Marathon course map here.

To reserve your spot in the 2019 running of Allamuchy’s Shades of Death Half Marathon or 6.66-mile Devil’s Run, register online at RunSignUp.com here.

Ever run in the Shades of Death Half Marathon? Share your impressions here, or post your review in the Comments below.