Set for its 50th annual running underneath the breezy skies of New Jersey’s Gateway National Recreation Area, the Jersey Shore Half Marathon takes runners on a fast and flat course that’s among the oldest distance running events anywhere in the state.

From the starting line near Parking Lot E, which lies near the southern end of the barrier spit that sticks out into Sandy Hook Bay, runners follow a fast and largely flat USATF-certified double loop course that unfolds all the way to the lighthouse area at the north end of Sandy Hook and back to the parking lot area for the finish.

More than 1,000 runners crossed the finish line in both races combined at previous years’ running of the race, including more than 800 runners in the half marathon alone.

While you’re in the area and if you have time, stick around for a tour of the Gateway National Recreational Area, a 26,000-acre park with natural features such as marshes, sandy beaches, and wildlife sanctuaries and man-made structures like its historic military installations.

The park is noteworthy as the first urban recreational area of its kind set aside by the federal government, along with San Francisco’s Golden Gate National Recreation Area.

(In past years, the race also offered a Sandy Hook Lighthouse 5K race; that distance has not been offered since 2016.) 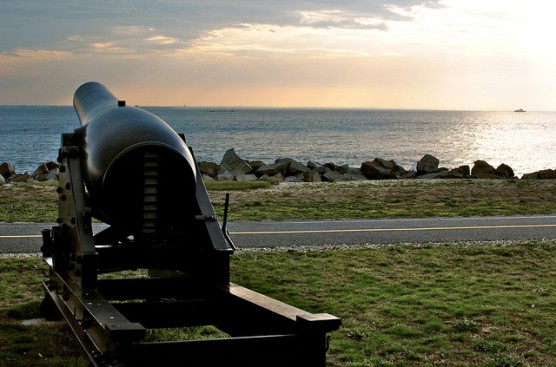 The view along the main road at Fort Hancock, N.J. (Photo by Sinead Friel/flickr)

Nestled along the northern end of the Gateway National Recreation Area peninsula that divides Sandy Hook Bay and the Atlantic Ocean, just over a 55-mile drive south from New York City, Sandy Hook typically sees October temperatures that average between 49°F and 64°F, with rainfall totals averaging just under 3.4 inches for the month.

See the race route map for the Jersey Shore Half Marathon here.

To reserve your spot in the 2023 running of the Jersey Shore Half Marathon, register online at RunSignUp.com.

Ever run in the Jersey Shore Half Marathon? Share your impressions here, or post your review in the Comments below.